The land our beloved farm sits upon was first purchased from the United States government back when Fillmore was president.  It was sold to J. Eberhard from New York in 1852.  Then, sometime, in the 1880s, three Irish born brothers, Thomas, Patrick and James Kane, each bought neighboring parcels from Mr. Eberhard and were the first families to settle the land.  James Kane bought 180 acres, married his wife Catherine, and built our home between 1882 and 1887. They had babies, they lost babies. Half of their children did not live past childhood.

This may be a picture of one of those children — it was left over from the estate sale of Dennis Kane. I hadn’t thought much about the first generation of Michigan Kane’s lately, but having a face to put with the family name gives me something more to consider. I think that would make this little girl Elizabeth, but I can’t be certain.  I truly can’t decide whether I adore her ‘whiskey in a tea cup’ glare or whether I am creeped out by her.  (Worst case, I will find a spot to hang her up… in the corncrib.) 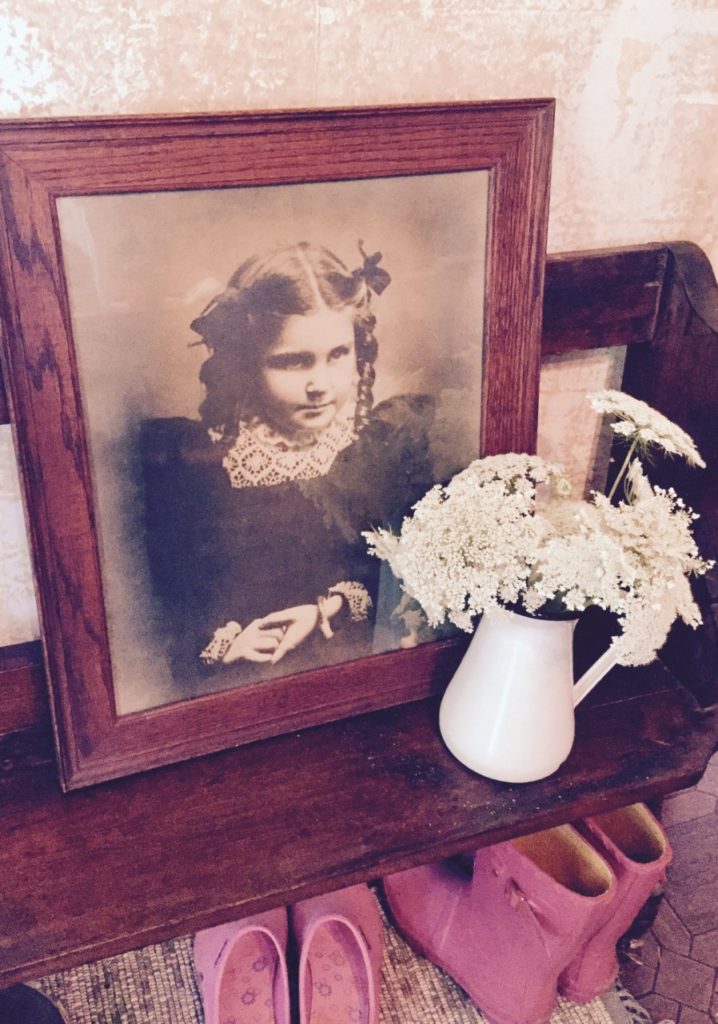 I don’t usually ponder genealogy or lineage — they seem like potentially small bits to me. Perhaps they measure something quite narrow. They tell me nothing of the bond between the three Irish Catholic brothers, who are now all buried at St. Mary of the Assumption cemetery, 5 or 6 miles down the way, from the farm. Ancestry tells me little about these brothers who trusted each other enough to leave Ireland together and ended up calling southern Michigan their home.

James farmed the green sea I get to look out over. Multiple times a day, that green sea that gives me more peace than any salty ocean ever did. Did he and his the brothers find respect and joy in each other’s lives? Were they united in both their celebrations and their sorrows? Those are the kind of things that I wish the Historical Society could document and measure. But again, all we know for certain is that Thomas, the oldest Kane brother, died in 1889. Patrick, the middle son, died in 1891. And James, the baby of the family, who built this house I now call my forever home, lived until 1912 — outliving his brothers by over 20 years.

I hope the Kane brothers were glad that they came to America to farm the land I look out over.  I hope that despite their hardships and their losses, that this little girl in the picture had an honest, sweet life. Afterall, that is really what we aspire to grow here at our dirt road farm.