After getting the footers in, and the walls up, came the task of opening up and connecting to the old root cellar.  Thankfully, our builder, Doug Hopkins, and his crew, brought the necessary muscle for the task.

I haven’t really talked about Doug yet much here on our little website — maybe because I will gush over how much we love having him as our GC?! — and I don’t want to sound like brown-noser.  (So, for the record, I am not brown nosing. Just sayin’.)

Here’s some background on why we gush about Doug…

When we started hunting for a builder, we met with a few fellas. We first met Doug the summer of 2015, after getting a recommendation from family (huge shout out and thanks, Erin & Kirby!). When Doug came out to the farm, BJR and I walked him around the property, showed him the lay of the land, and then suggested showing him the inside of the old house.  Doug’s response was “Sure, give me a minute, I’ve just gotta take this all in…” as he took a few more moments to look out and appreciate the view and the green sea surrounding DRF.

He was the guy for our DRF.

I don’t have a picture of what that exact moment from two years ago looked like, but this picture I snapped when we first started digging sums up a similar stance. 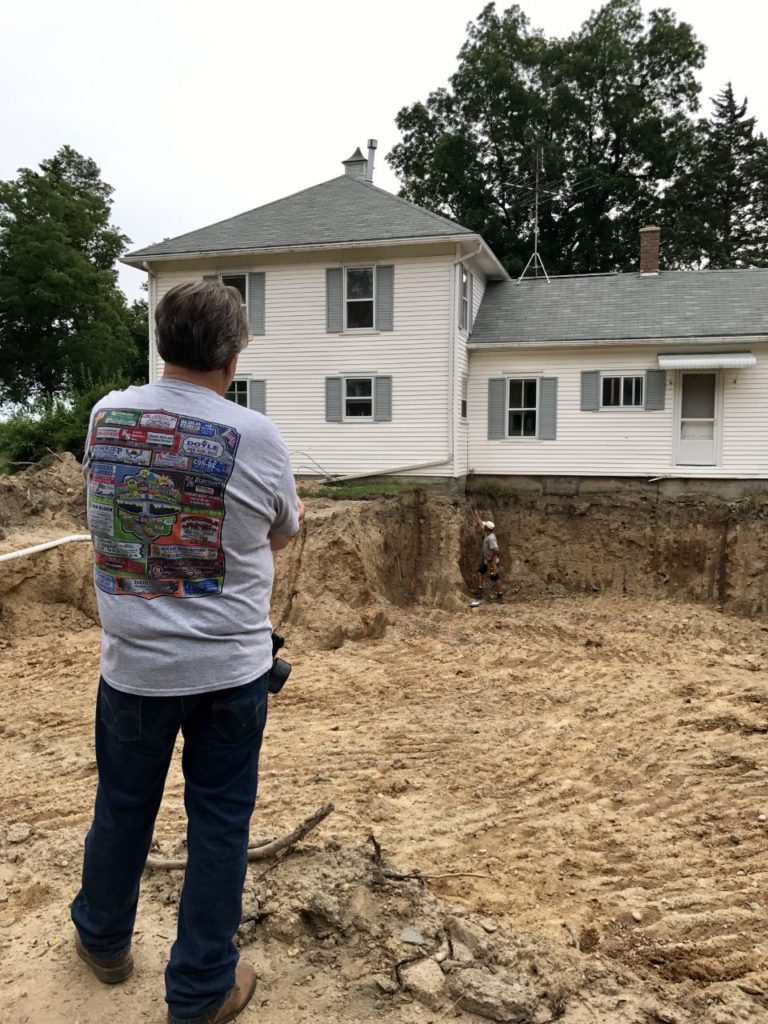 We got on Doug’s waiting list just after the New Year in 2016, and now, here we are. We know we are in the best of hands with Doug and his fellas and that is a really comforting feeling. (End of not brown nosing.) 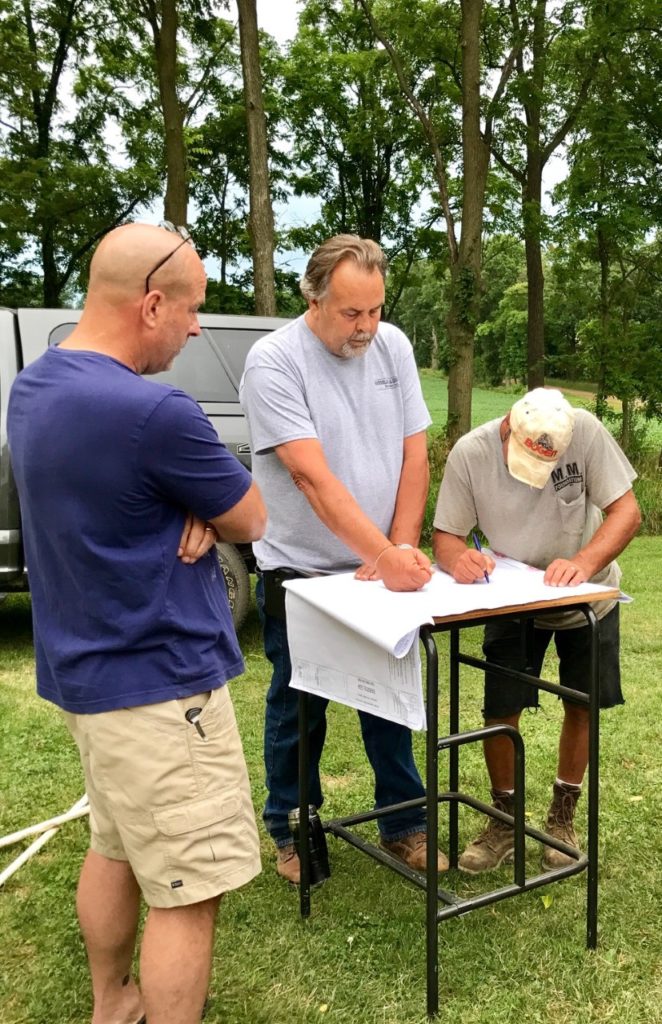 Let There Be Light…and Air

So, Doug and his crew, Adam, Luke and Aaron (aka Mookie…) began the process of busting through the old root cellar wall. 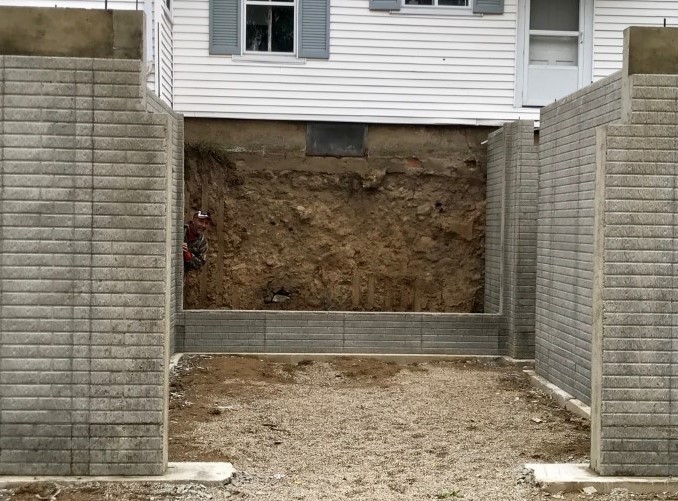 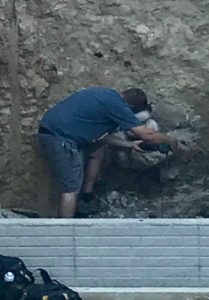 I wish I had been home for all of it, but at least I got home for the end of it. 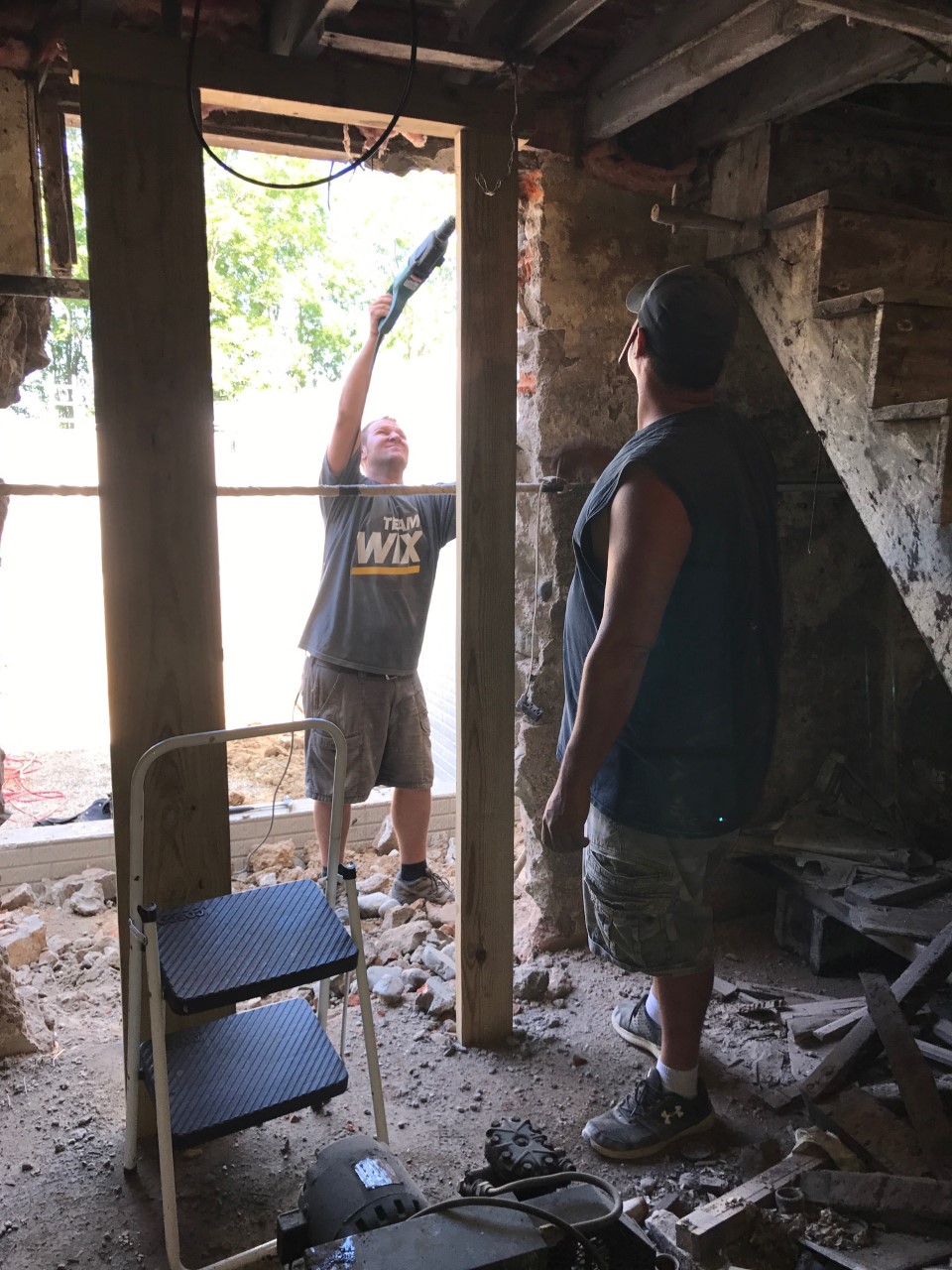 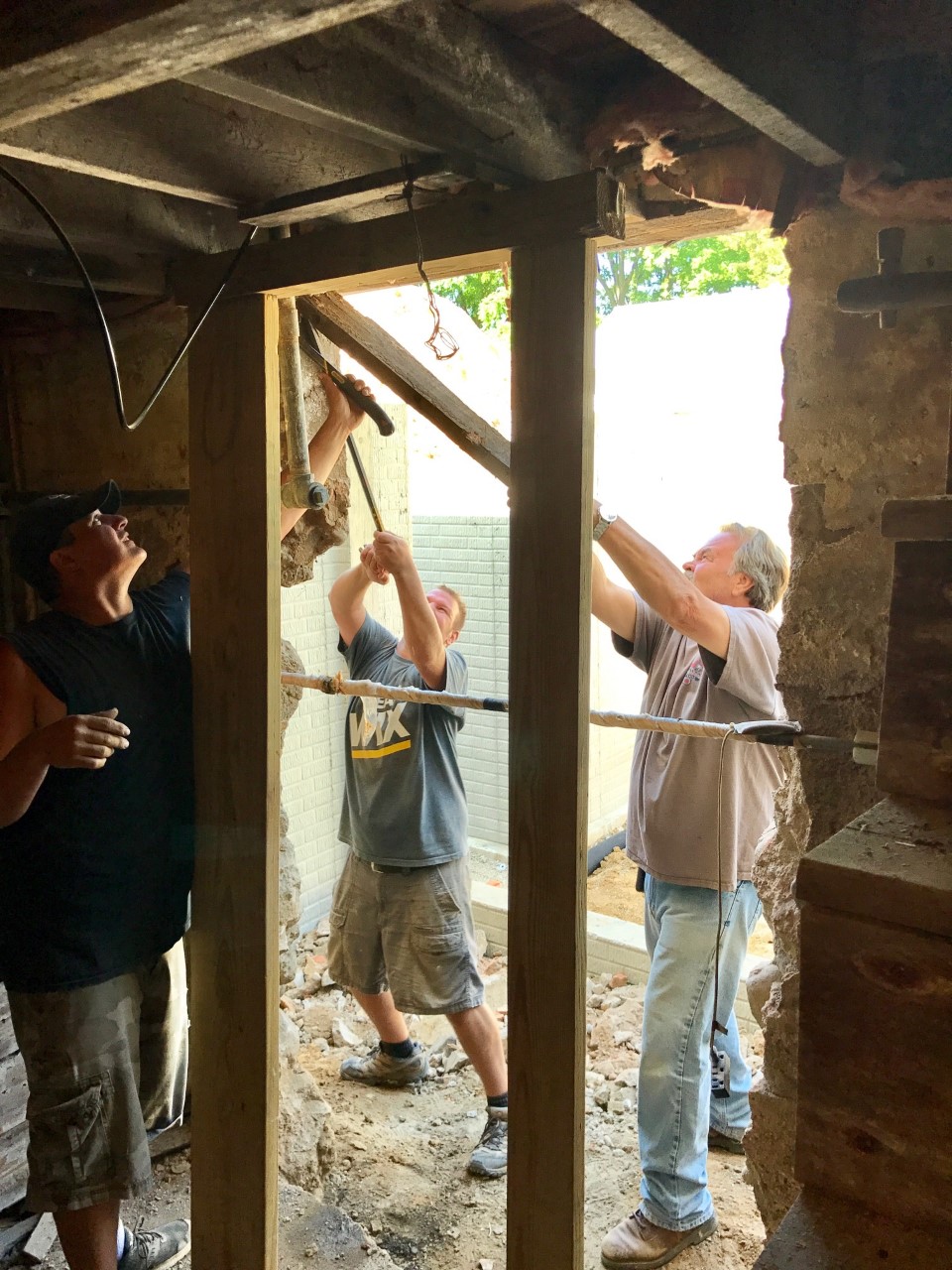 The guys said they enjoyed it — that it was a bit of a break from the usual, new construction process. That may or may not be enjoyment on Adam’s face though. 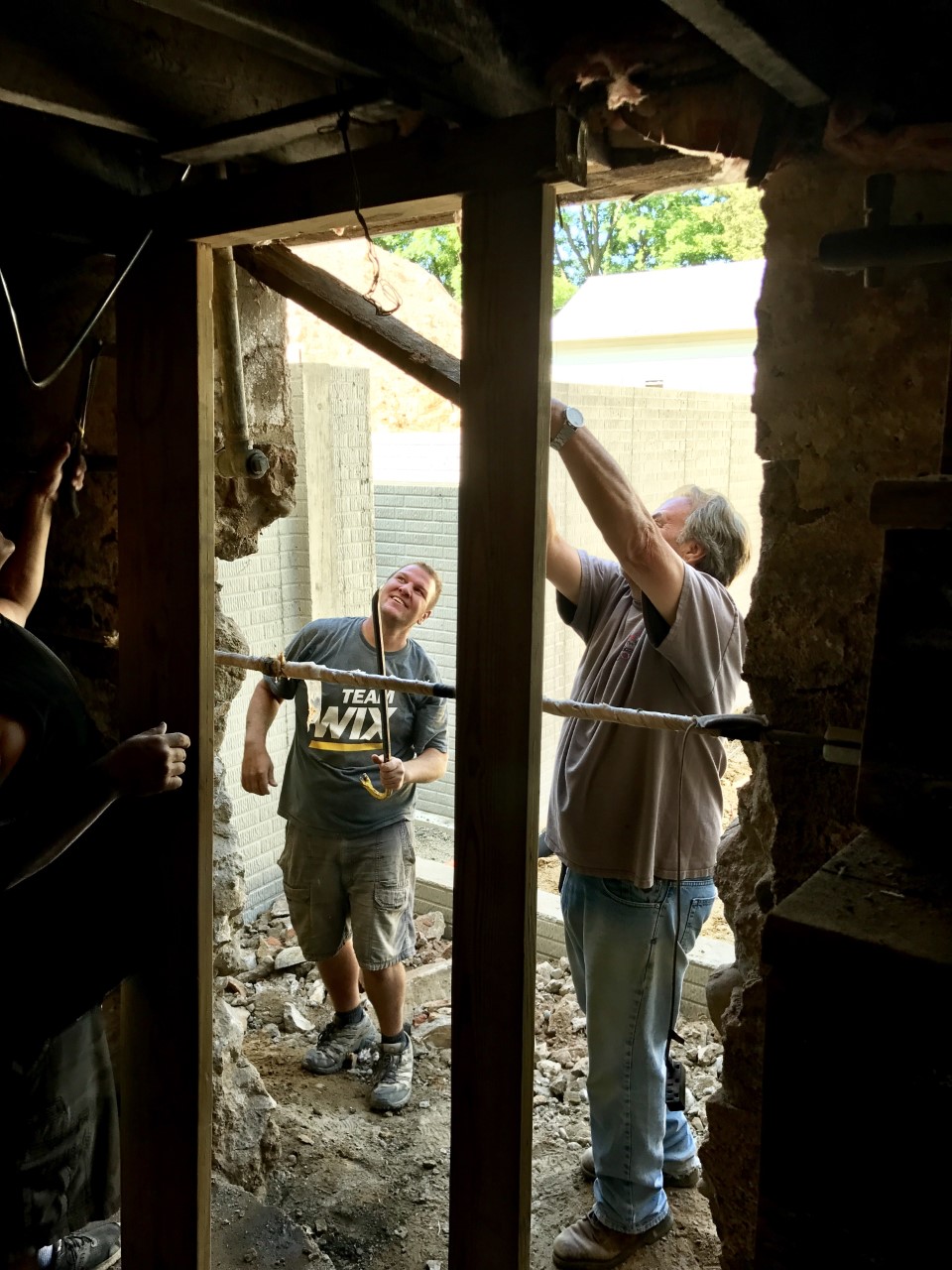 Once we had actual ventilation — aka FRESH AIR — in the cellar, I could stomach being down there long enough to finish tackling some of the dank mess. 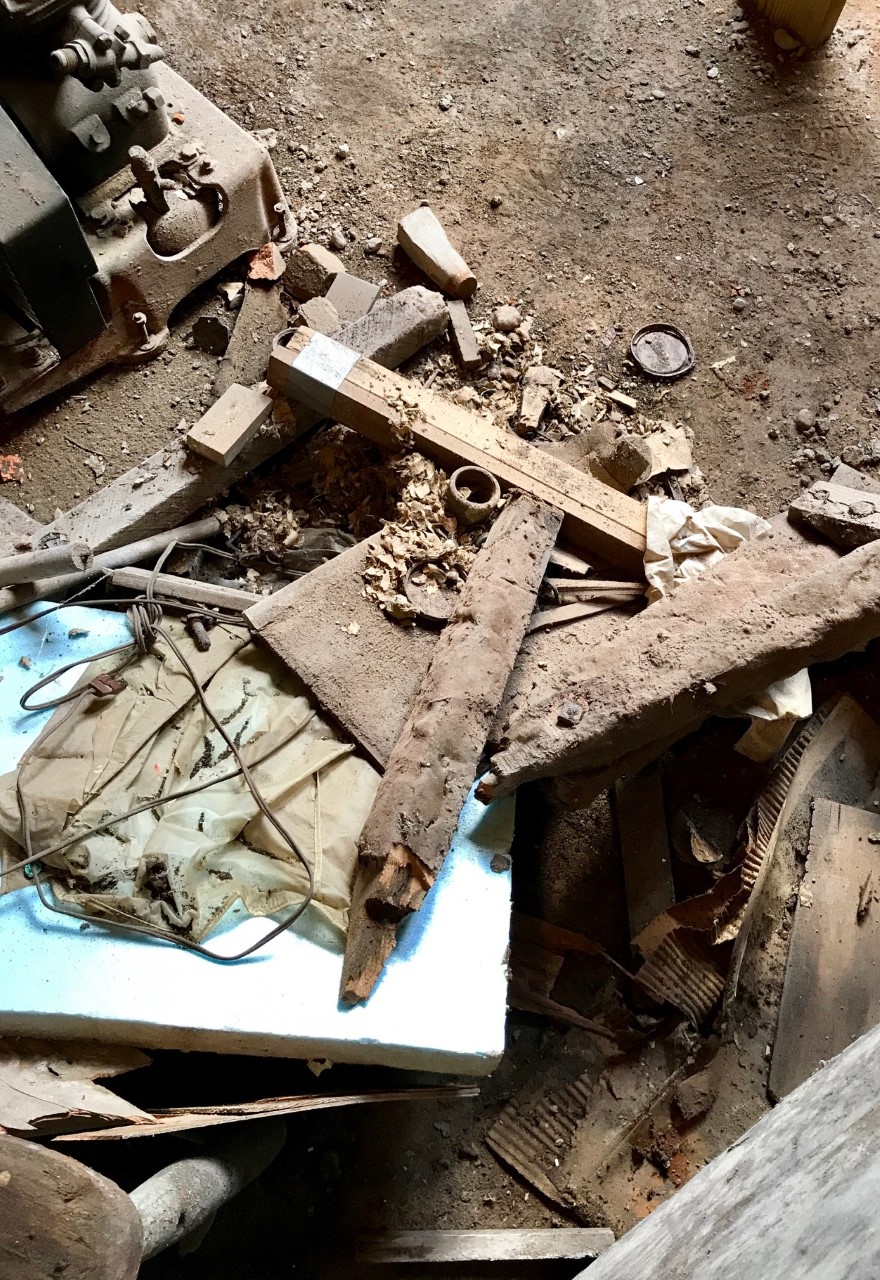 Underneath that newspaper pile was a rather large varmint nest. 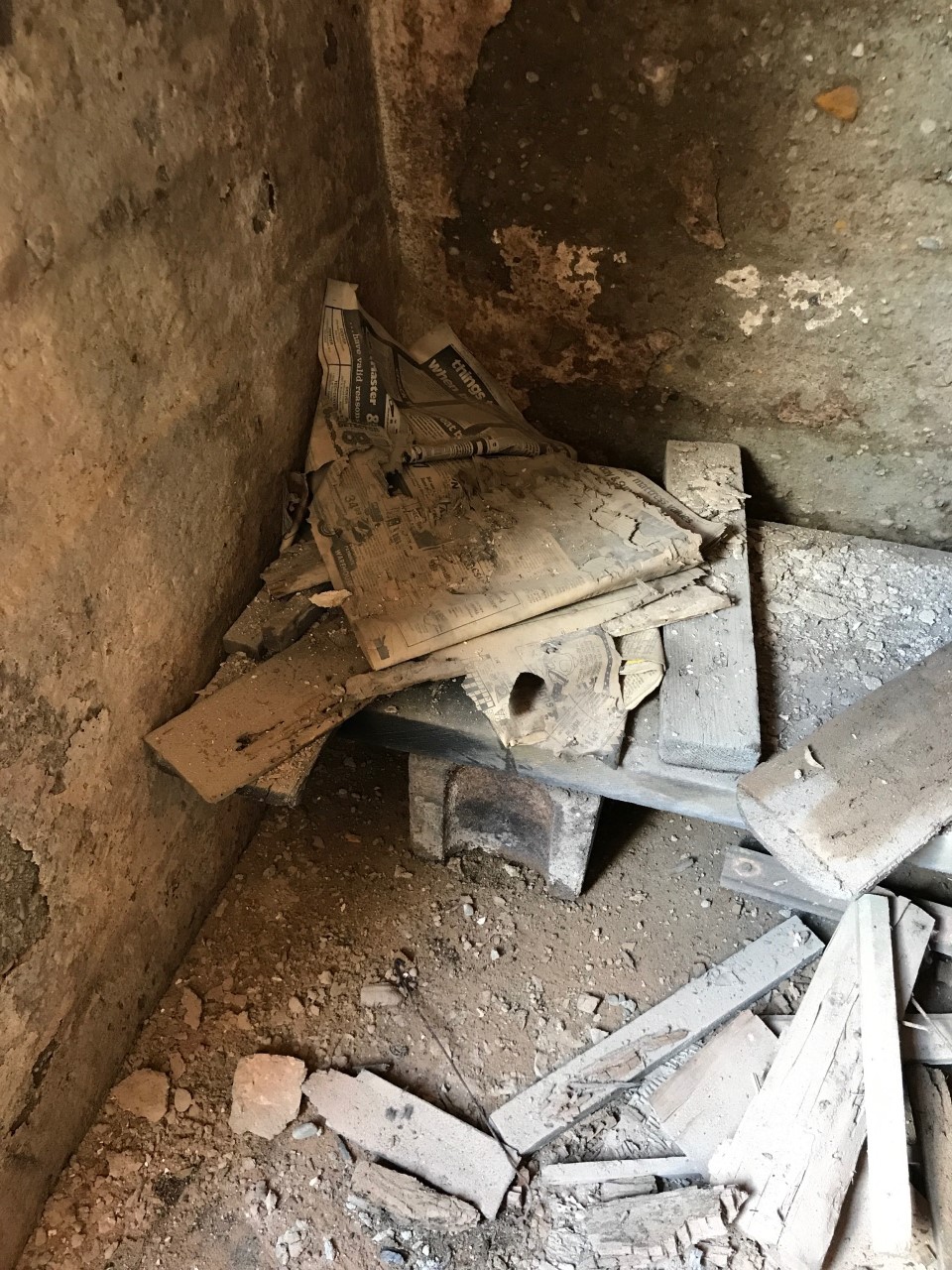 If the majority of the old farmhouse is rustic and primitive, well, then… the root cellar is several steps below that classification.

I stopped counting how many mice and bat skeletons I found.

I stopped keeping track of how many unusual shaped, little “yellow stones” I found, until I realized they were teeth.  Gulp. I will spare you from any visuals on that front.

I have never seen mold so dense and mossy that it resembled shag carpet — until now.

Nor had I ever seen paint cans bust open upon being picked up either. 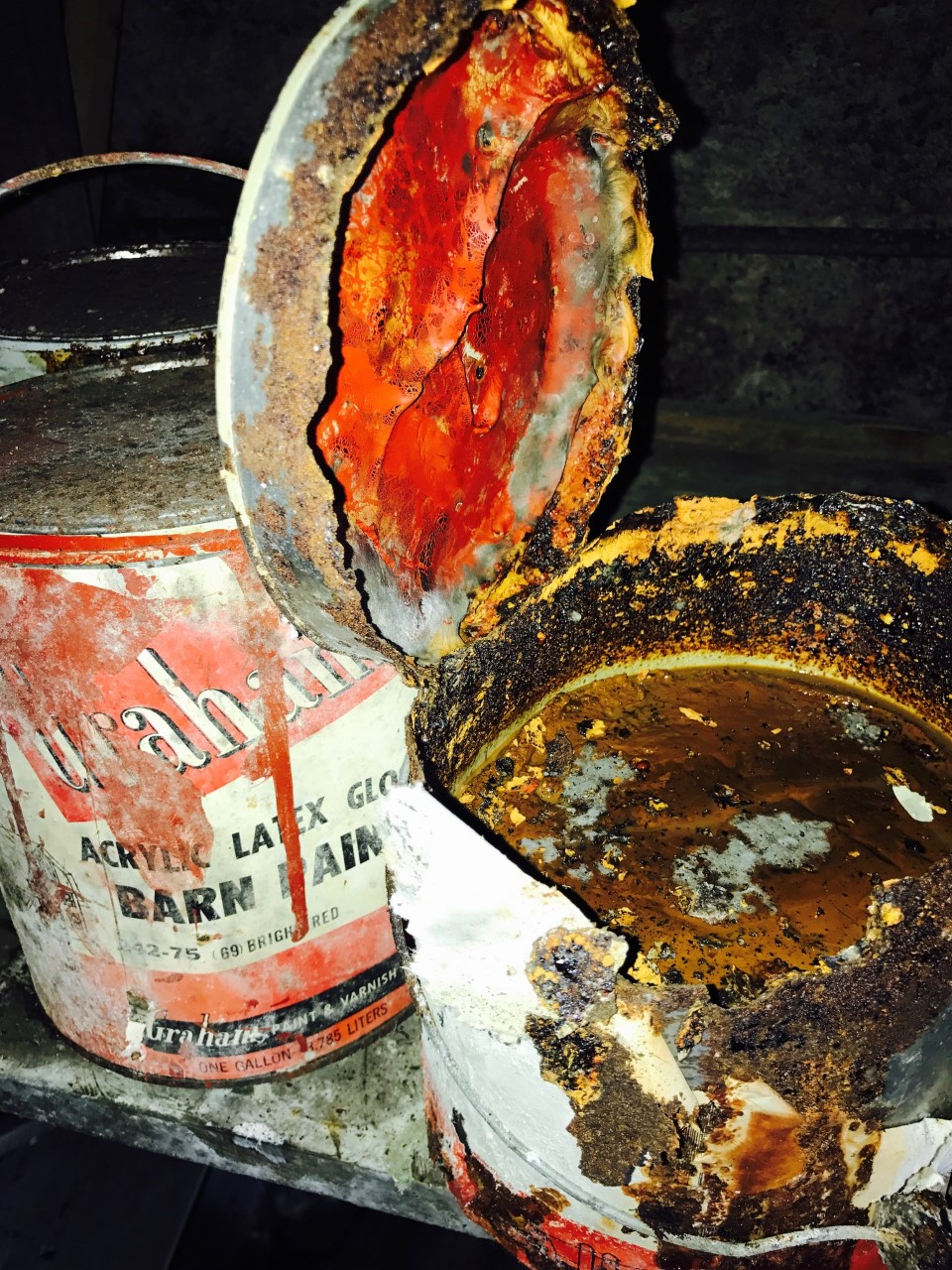 I carted out about a dozen or so of those gelatinous rust buckets.  The only endearing moment in that experience was the old fancy script writing on one of the cans which said, “For Elizabeth.” 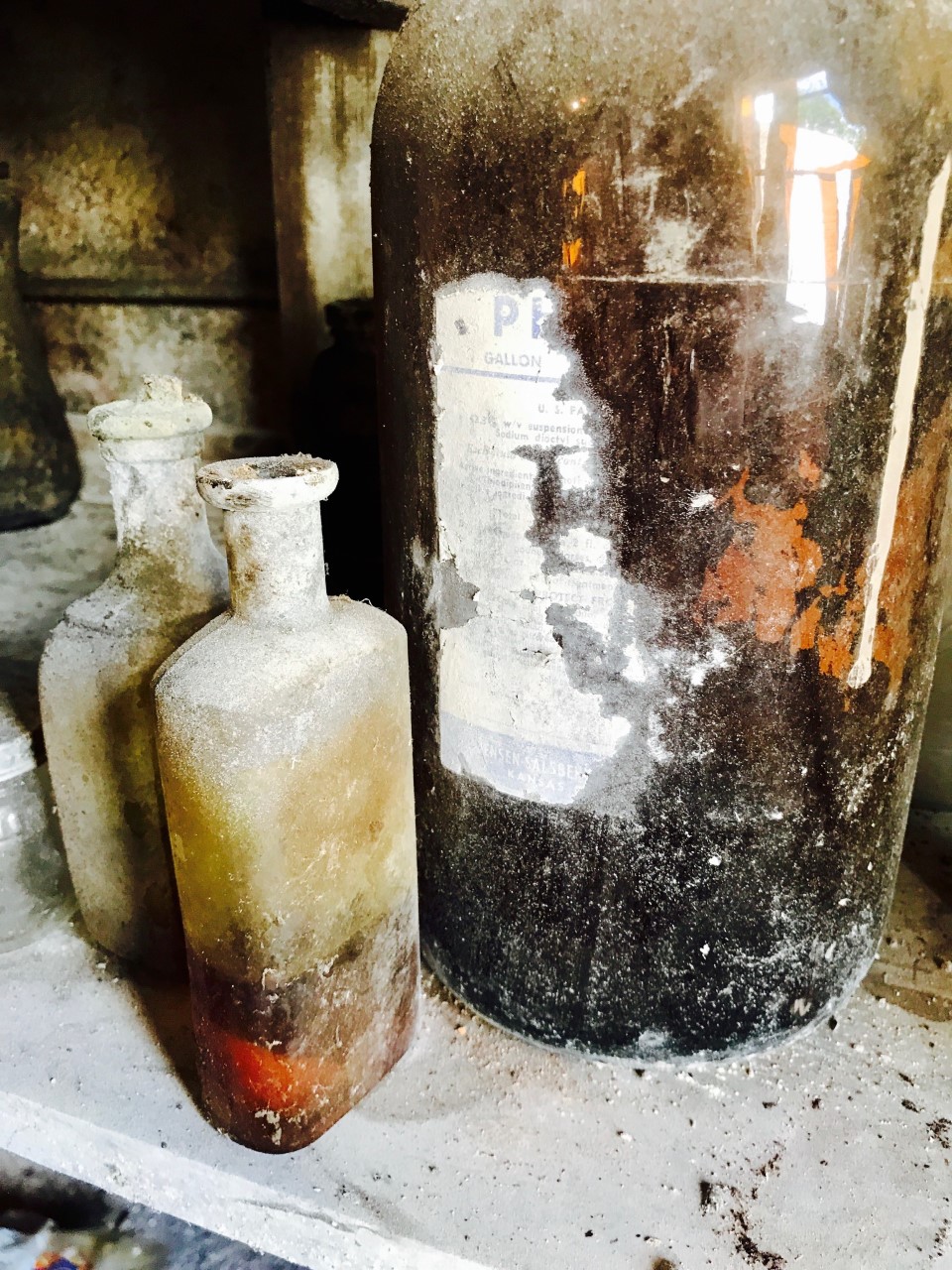 I did not have the courage to take a swig of Miss Molly’s sherry. 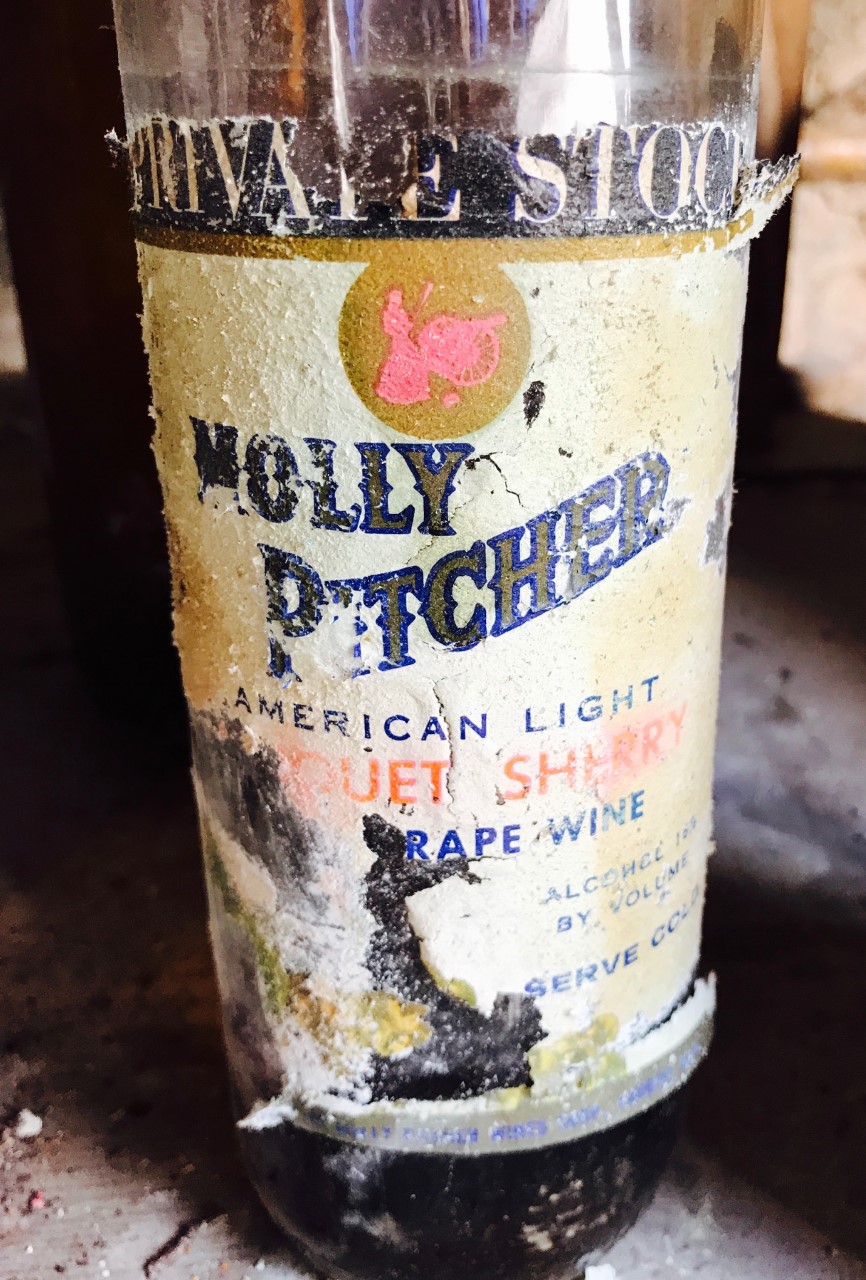 Even with all the grime and decay, I still get excited when I find a little treasure or two.  Like this old drawer front and kitchen scale. 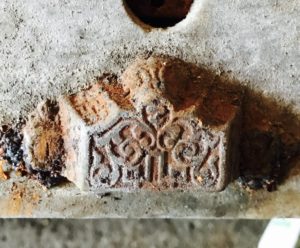 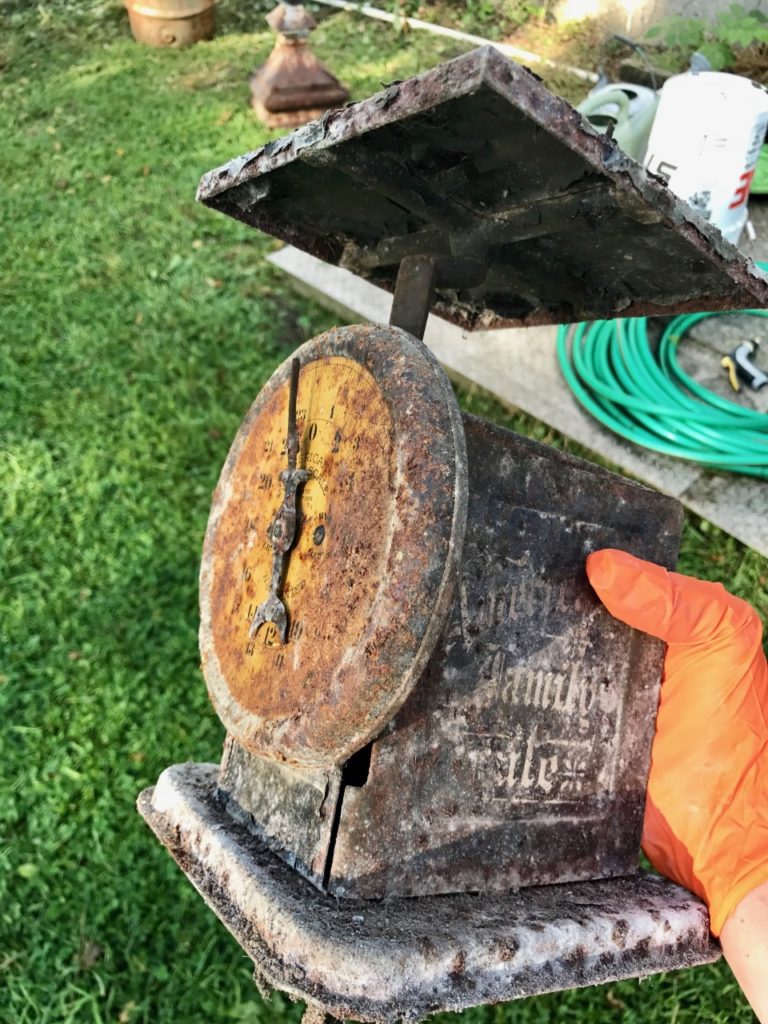 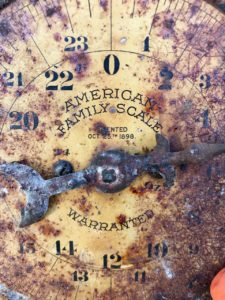 See that white coloring on the cellar stairs?  It’s not paint.  It’s mildew.  Hence all the toe kick marks left on it.  Sigh. 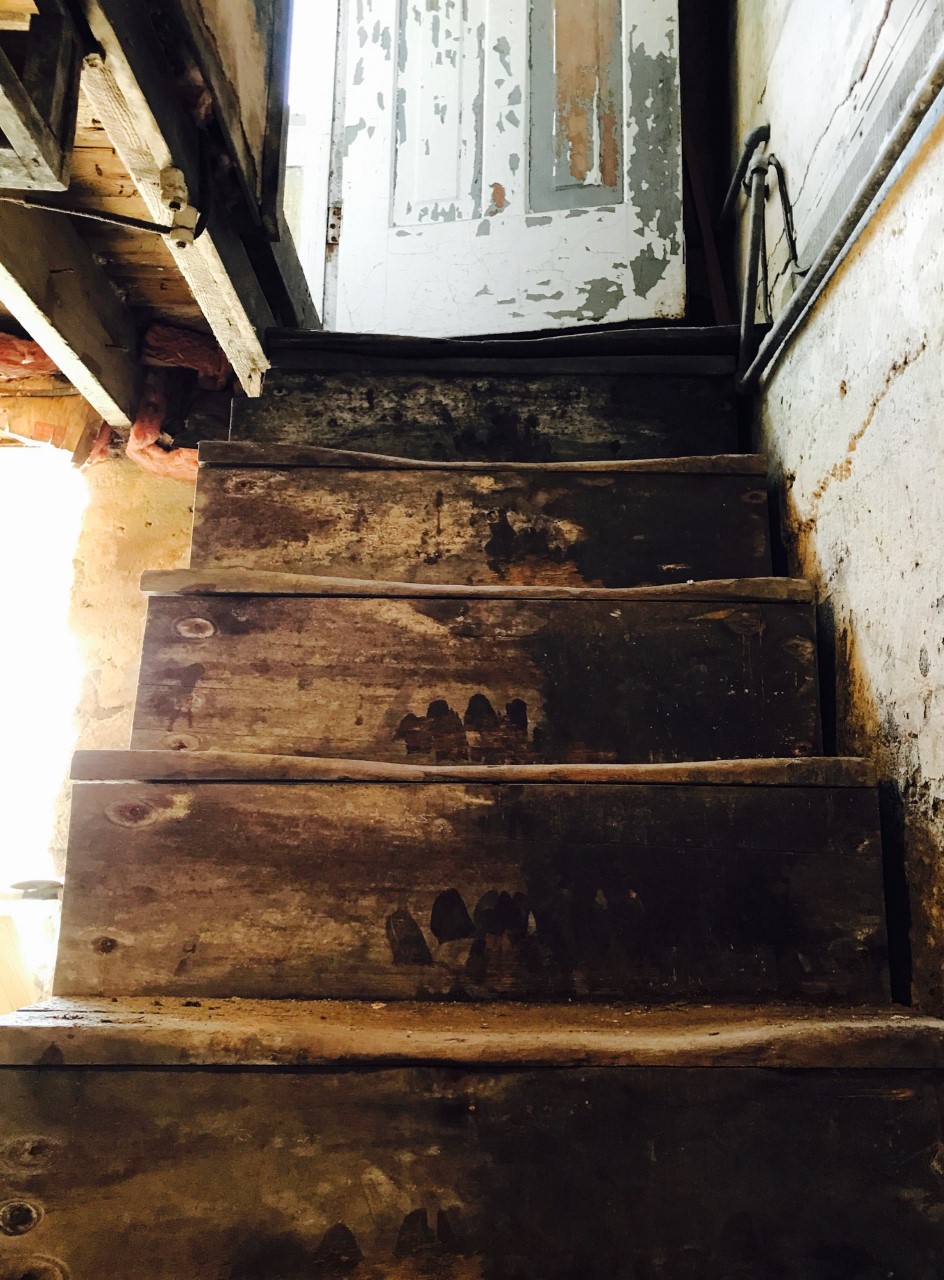 Joan Didion wrote that “a place belongs forever to whoever claims it hardest…wrenches it from itself, shapes it, renders it, loves it so radically that he remakes it in his image.”  Ms. Didion, this is place is ours. 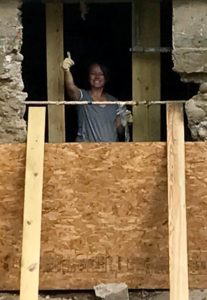 And for the love of God, will someone please call Mike Rowe and nominate me for winning at this dirty job stuff?