We will be SO very ‘temporary’ over the next 3-4 months, before the new construction addition is done.  We won’t be unpacking most of our belongings, because, A: we have no place to put them, and B: we would just be re-packing and then unpacking them again, AFTER the addition is done.  So, we are box people.  We are country people.  And of course, we are lovin’ it!

I secretly hope that when we do eventually unpack in 3-4 months, that much of what we unpack will just go to the Goodwill or Free Store.  I feel compelled to live lighter with less stuff.
Less stuff, less upkeep.
Less upkeep, more time for people.
More time for people, a richer life.

Anyway, because of the unseemly Boxtropolis City of which we are now temporary residents, I really felt we should have at least one spot pretty on the farm (other than the views of course).  It’s a chick thing. 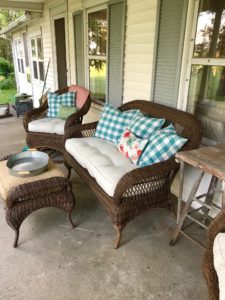 I think it turned out pretty darn appealing.

When are you coming to DRF for a coffee? 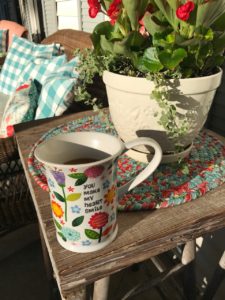 We are waiting…  I have saved you the best seat in the house, right next to me.   (Chances are that BJR is already out working…)