To Be Without a Home

While the septic has been happening outside this week, the drywall has been a slowww inside process this week and last.

What we thought would be started and finished last week, in five work days, turned into started and not yet finished, in what should now be ten work days. 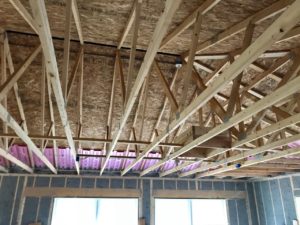 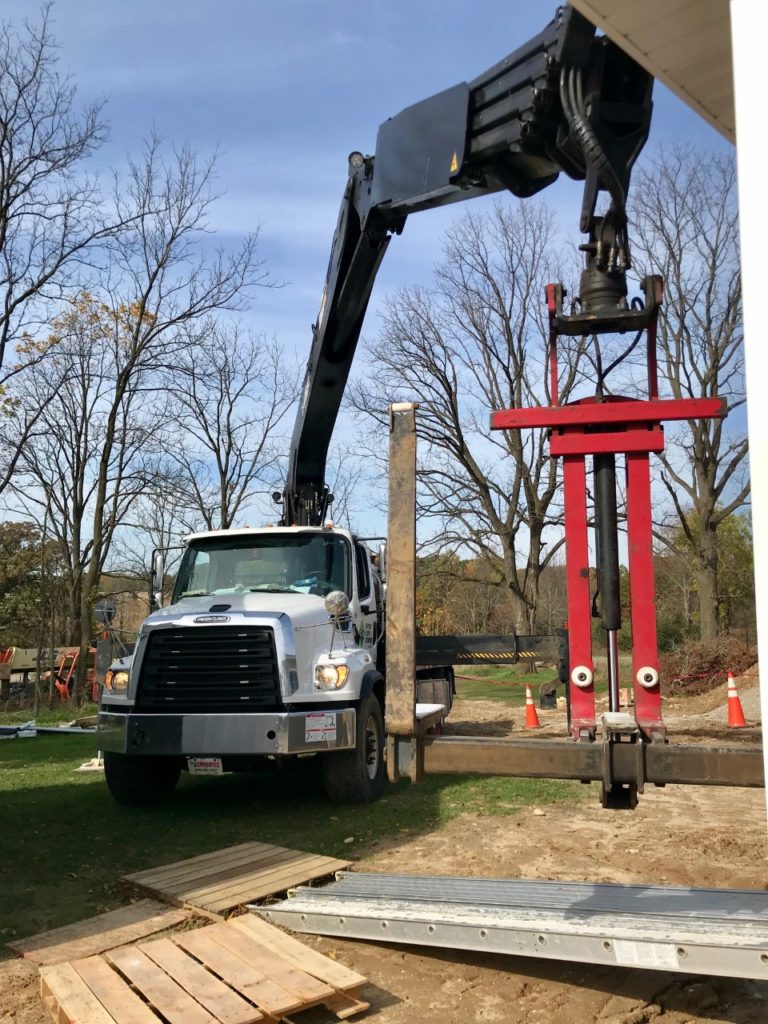 As I sit and watched this really nice fella who delivered the drywall, operate his remote control, I thought once again about all those mommas who preached at their kids, “you play too many video games,” thinking it would never translate into a marketable skill. Well, the joke’s on us, mommas — they figured out how to be marketable! 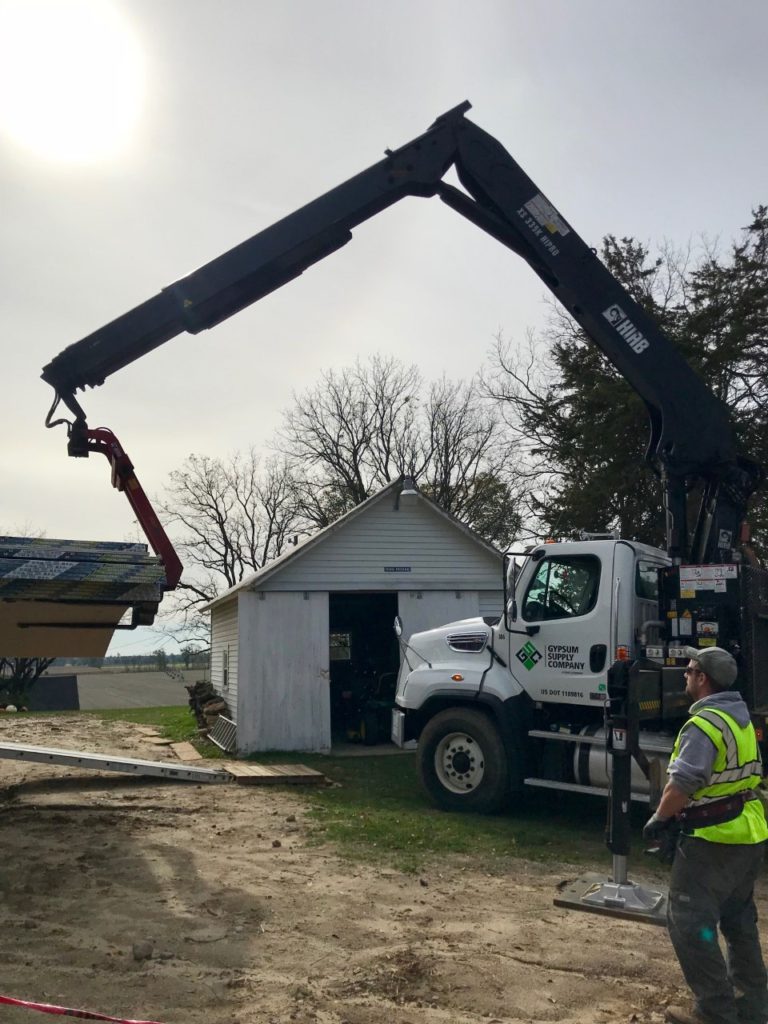 It really is amazing how quickly big equipment can make things happen.  What would have been hours of manpower to physically carry or cart sheet after sheet of drywall now can happen in about 20 minutes. 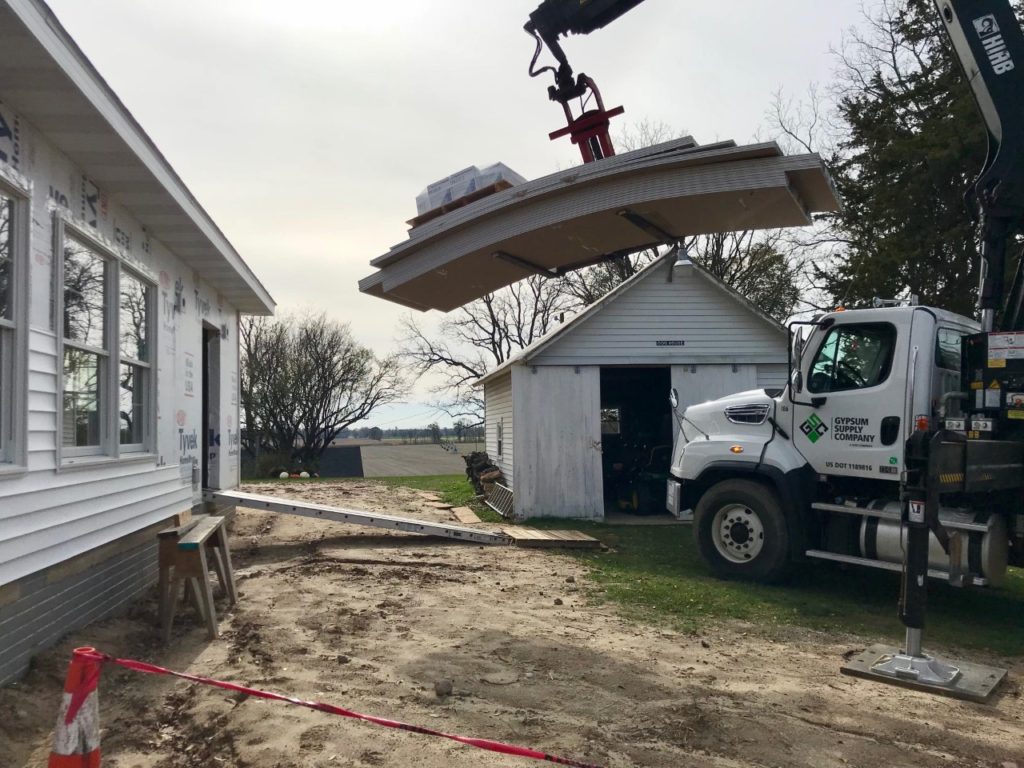 There is no way I would trust myself to maneuver that load around — I’d come in like a wrecking ball for sure.  But these guys are good at what they do and make it look so easy. 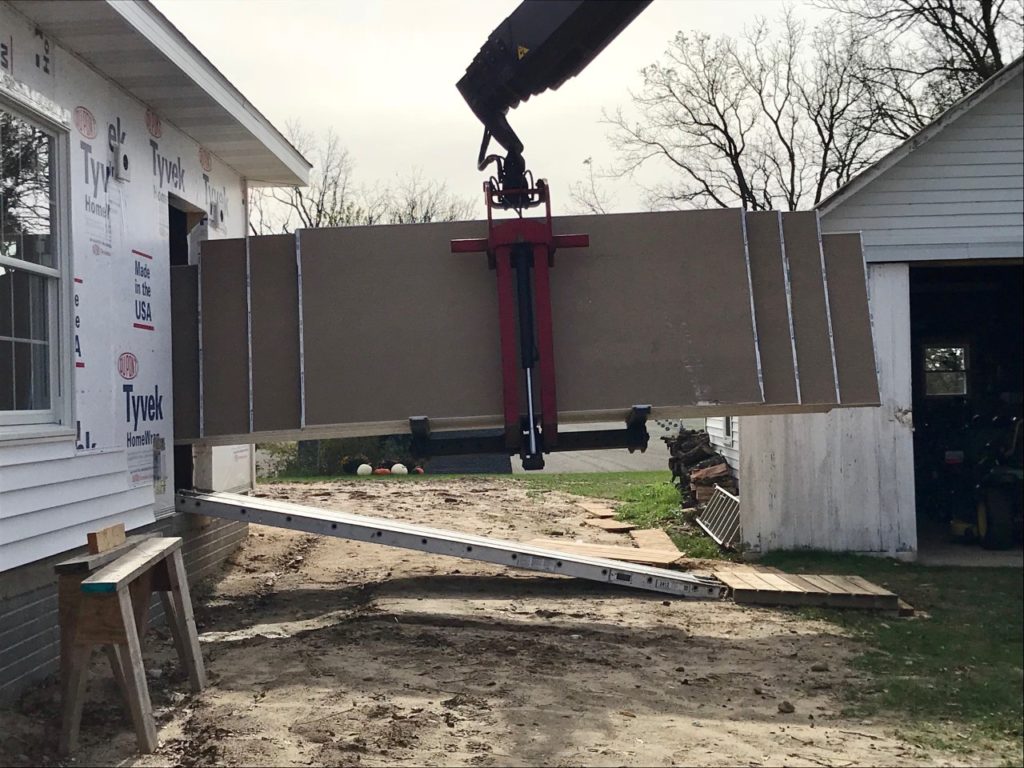 What took the longest was carting the right length drywall boards to each spot, in each room, so the installer didn’t have to. 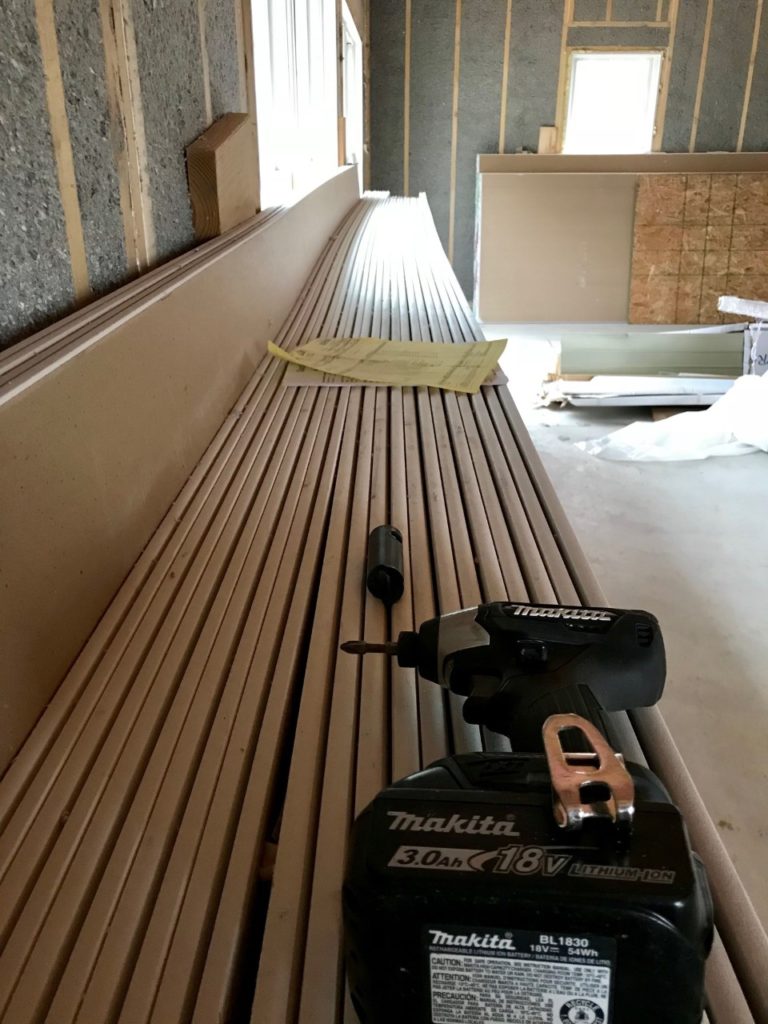 Next, we waited for Steve the installer to enter the DRF stage. 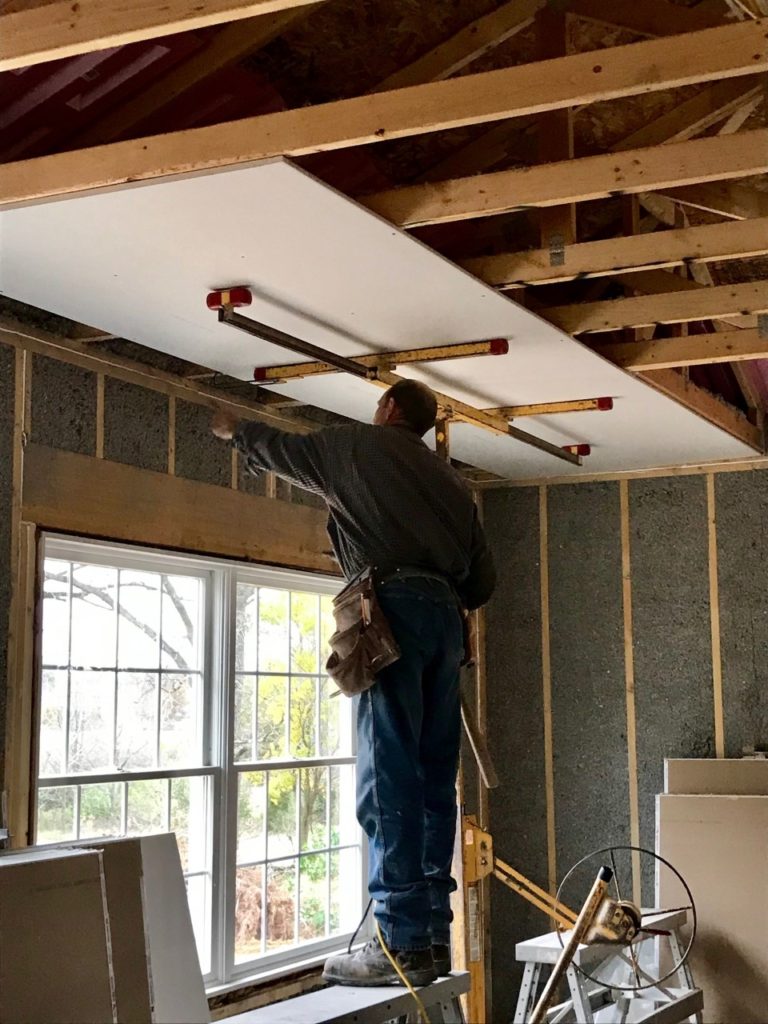 Steve was a super nice guy and doesn’t have a need for business cards. He just wrote his contact info on an index-card sized piece of drywall.  He and his wife play Euchre. We liked Steve. 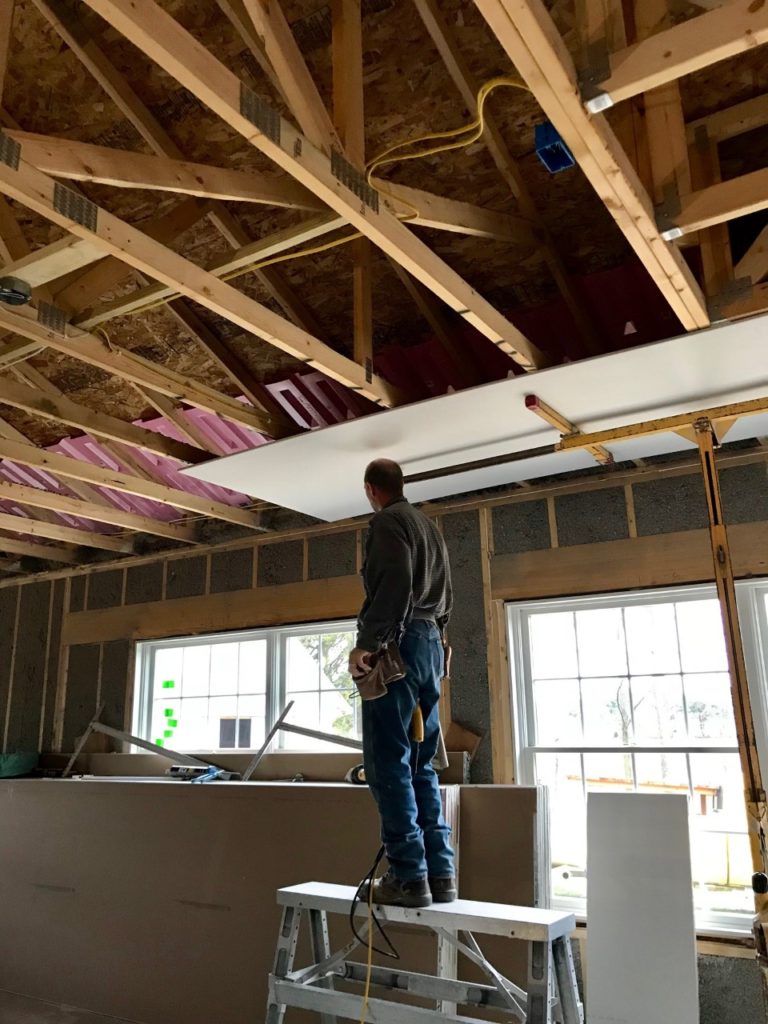 Steve’s job was to put up the drywall. Steve doesn’t do the mudding.  Too messy for him.

Here is the mudroom, before the mud.  The pass through doorway on the left leads to the start of the new “forever” kitchen and connects to the old farmhouse. 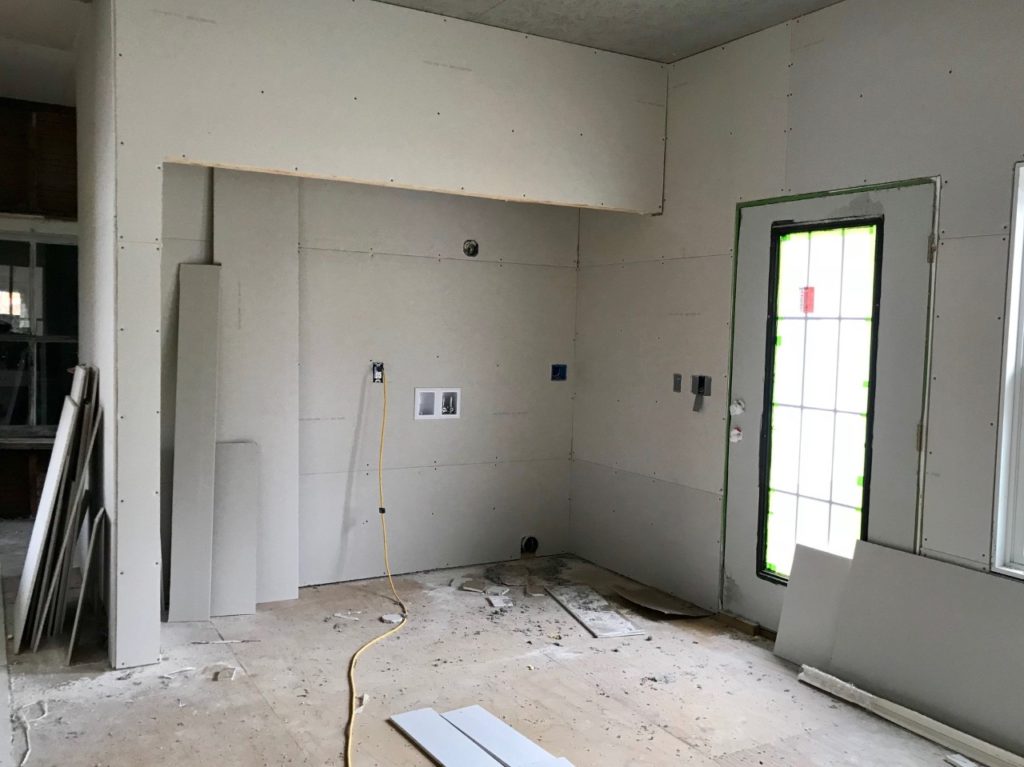 It was lovely to get the garage ceiling in.  Then the insulators came back out  to blow insulation on the top of the new ceiling. Only then did the new furnace shut off, after 9 or so days on continually running.  That made for a happy husband, now that we weren’t burning through propane quite so rapidly. 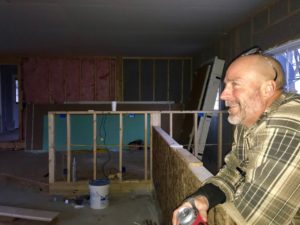 While it’s been a long road, it’s really rewarding to see it all come together.

The journey is worth every bit of cold toes, double flushes, and plastic silverware. 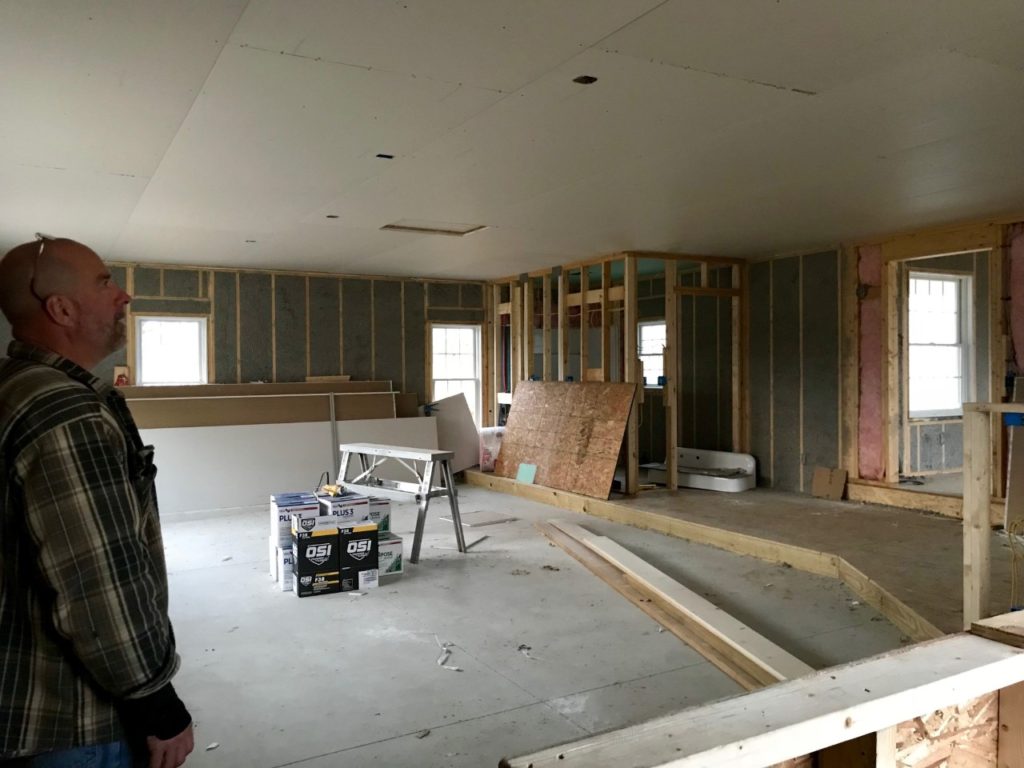 After the drywall was up, then the mudding began.  Do you see that tub insert?  That is in the garage bathroom.  There was a small discussion about a tub insert versus tile — which even though I would have preferred tile — it is ultimately a garage bathroom.  After we are done living in the garage while renovating the old house, I imagine it will get its share of abuse. 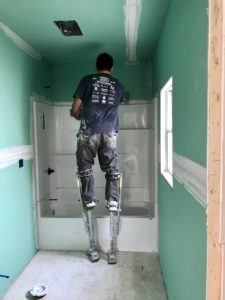 You can draw your own conclusions as to how the mudding is going.   That is seriously the best picture I got of the mudder.  Sorry Tony. 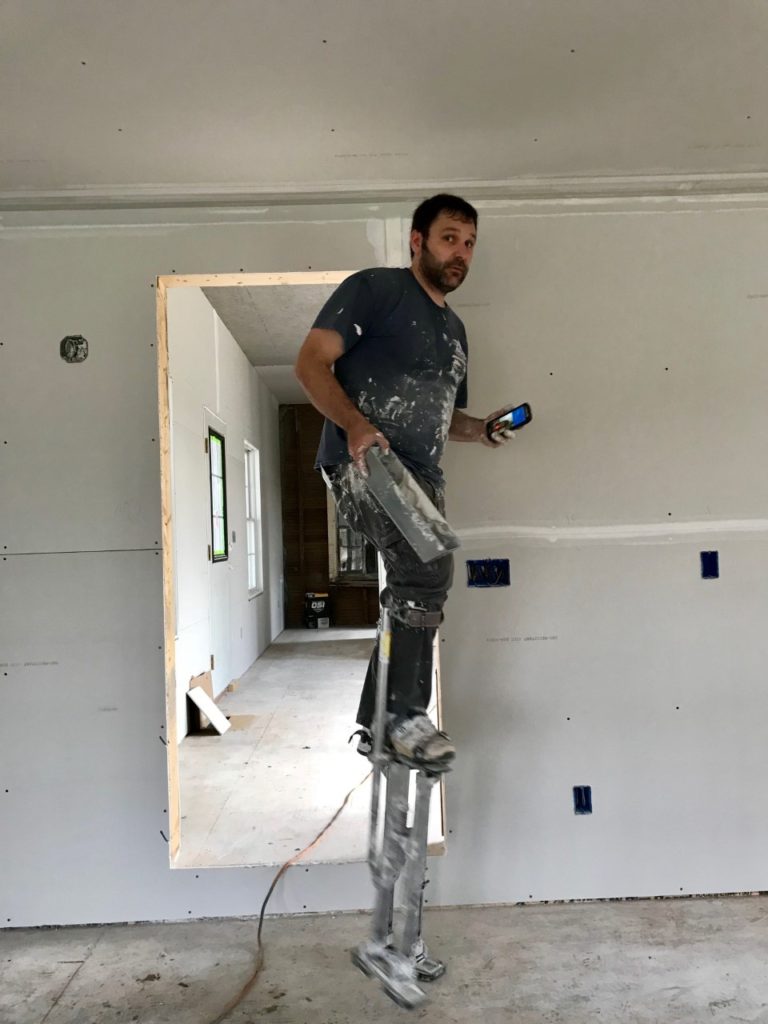 Tony is a nice guy, although he keeps trying to talk us into ‘texture’ on the ceiling.  Nope, not gonna happen.  We survived our popcorn ceilings in North Carolina and that is never going to happen again.  Ever.  The mudding is now done and drying over this weekend. We are scheduled to have the sanding done on Monday.  Cross your fingers, rub a rabbit’s foot, and toss a coin into a fountain, or whatever other kooky things you do for luck — chances are I am doing them all too.

BJR is a hands on guy. He was thrilled when the seamless gutters were installed.  This will help get the muck away from the new addition! 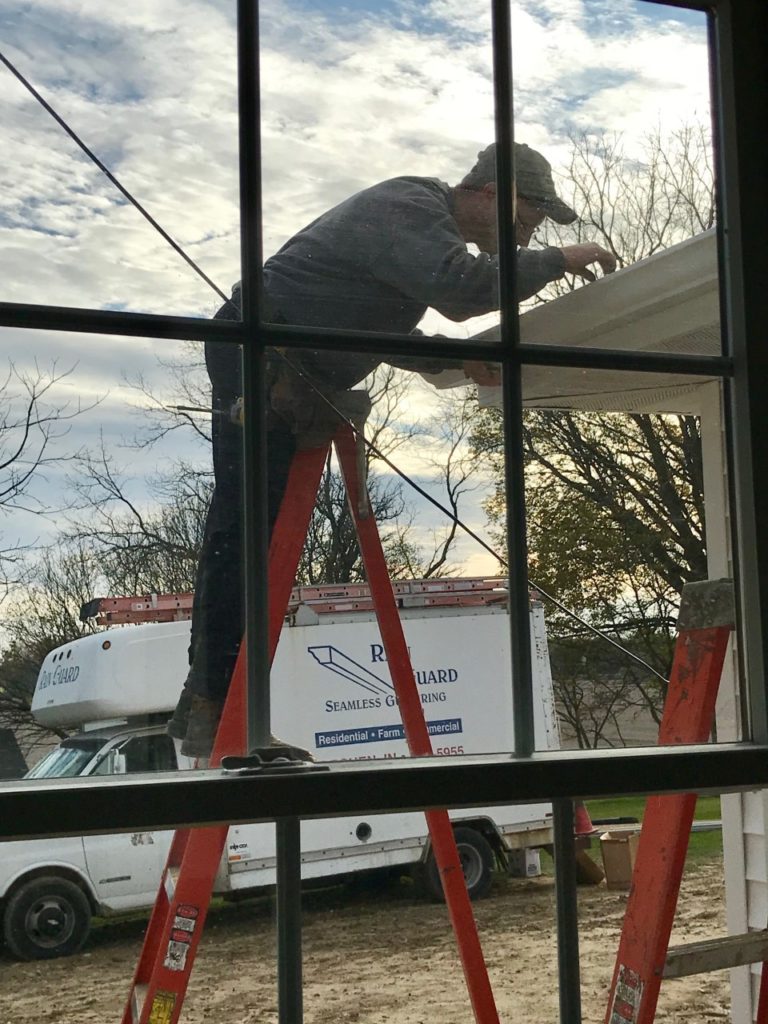 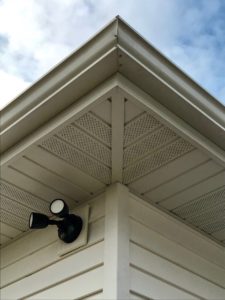 I do believe BJR was trying to tell me, he does what he wants in this picture, after I was giving him a hard time for working so much. 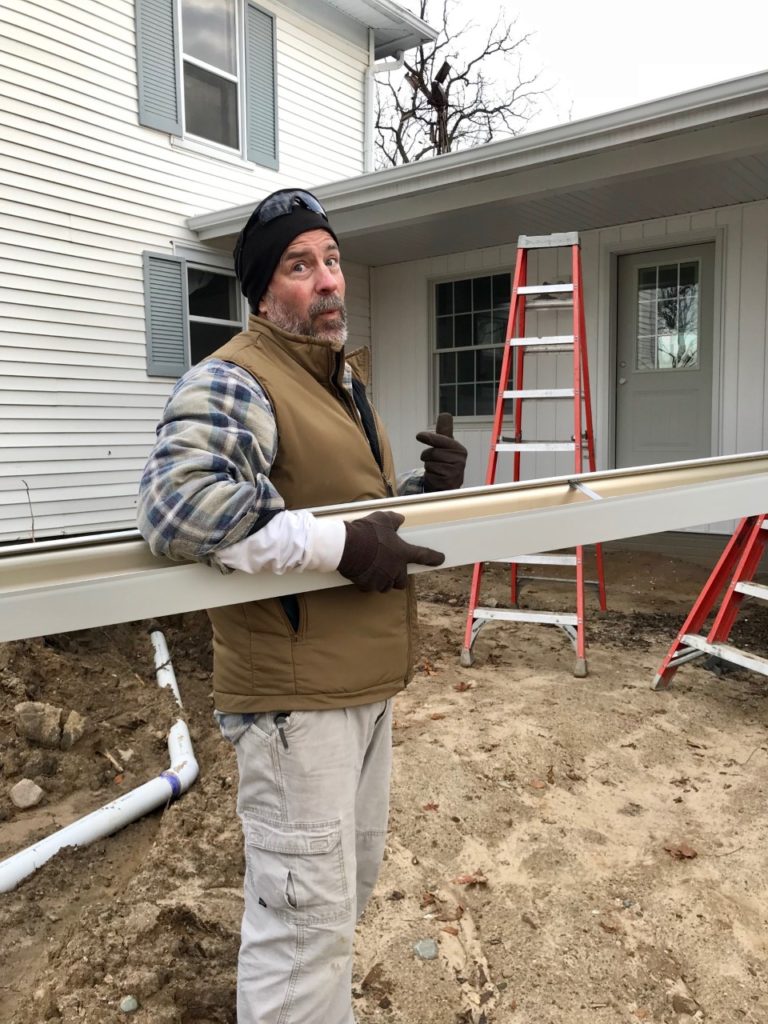 My man really is a hard worker.  I don’t think there is one single aspect of this addition that he hasn’t participated in. 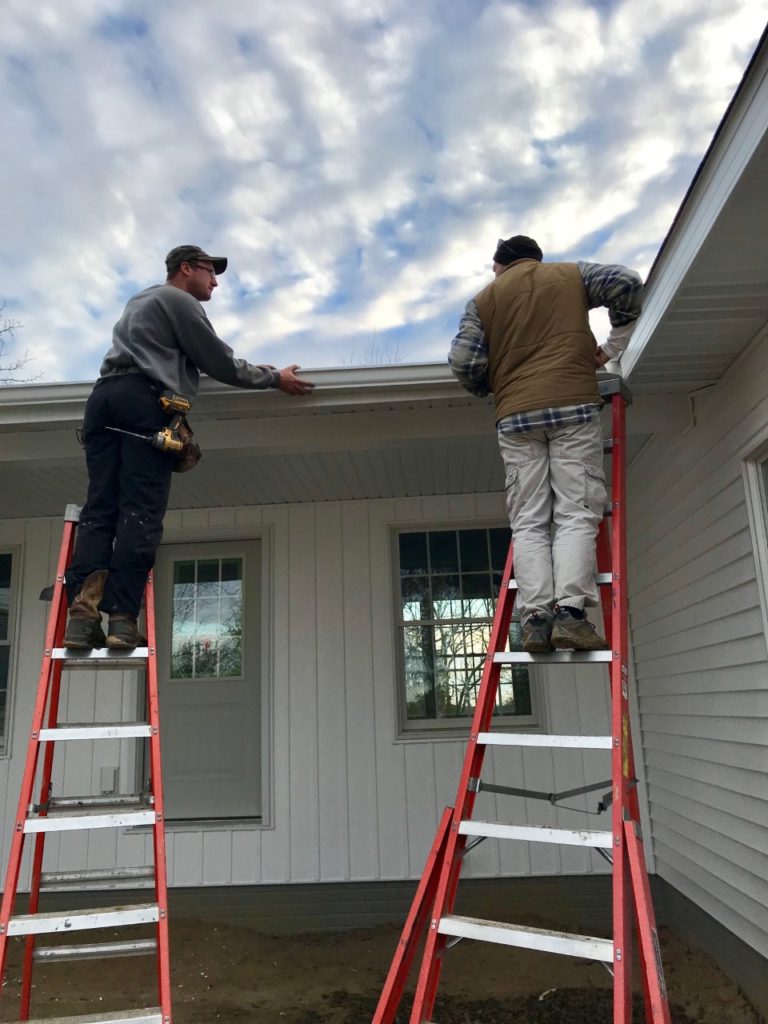 Before you think BJR is the only one working around here, oh pull-eeze…

I  get to play sometimes too.  After washing some j-blocks (those little boxes that go up against the siding around the light fixtures), Luke let me help install them, which meant going for a ride.  Yep, for real — that’s me. And no, I didn’t really have to go up that high to put on the j-block. 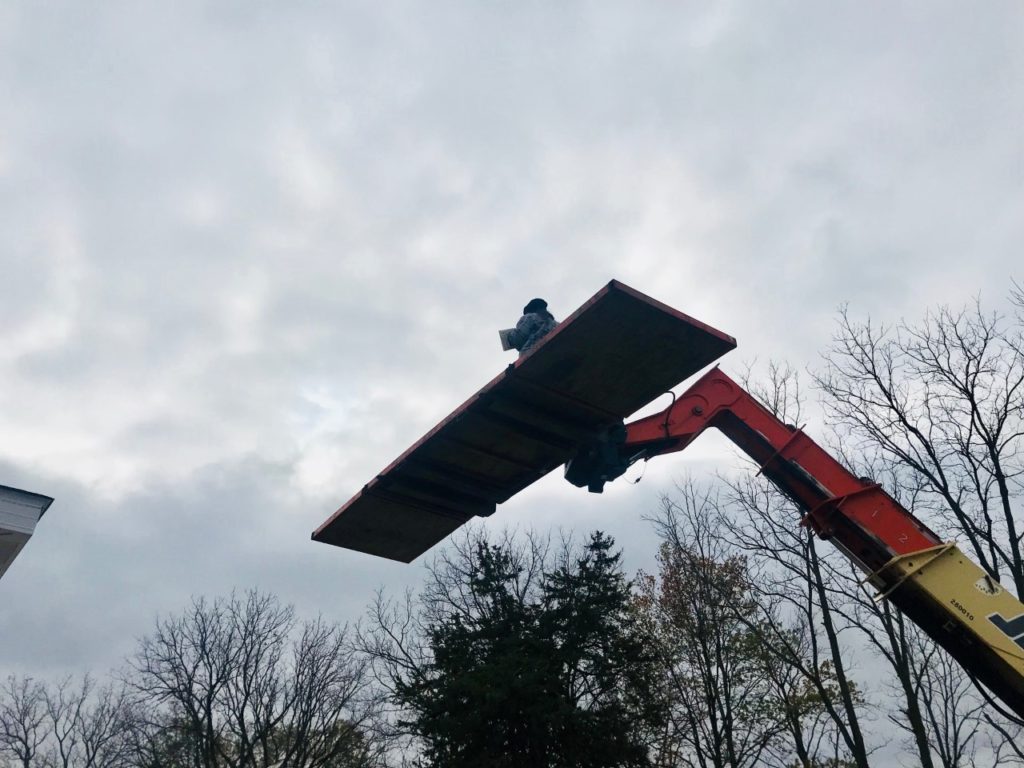 I was just a tad nervous, but did snap a picture or two, although apparently I was afraid to let go and turn around all the way to take a picture of the farm from 30 feet in the air.  Shucks. But I did get a nice picture of that big bolt (insert eye roll). 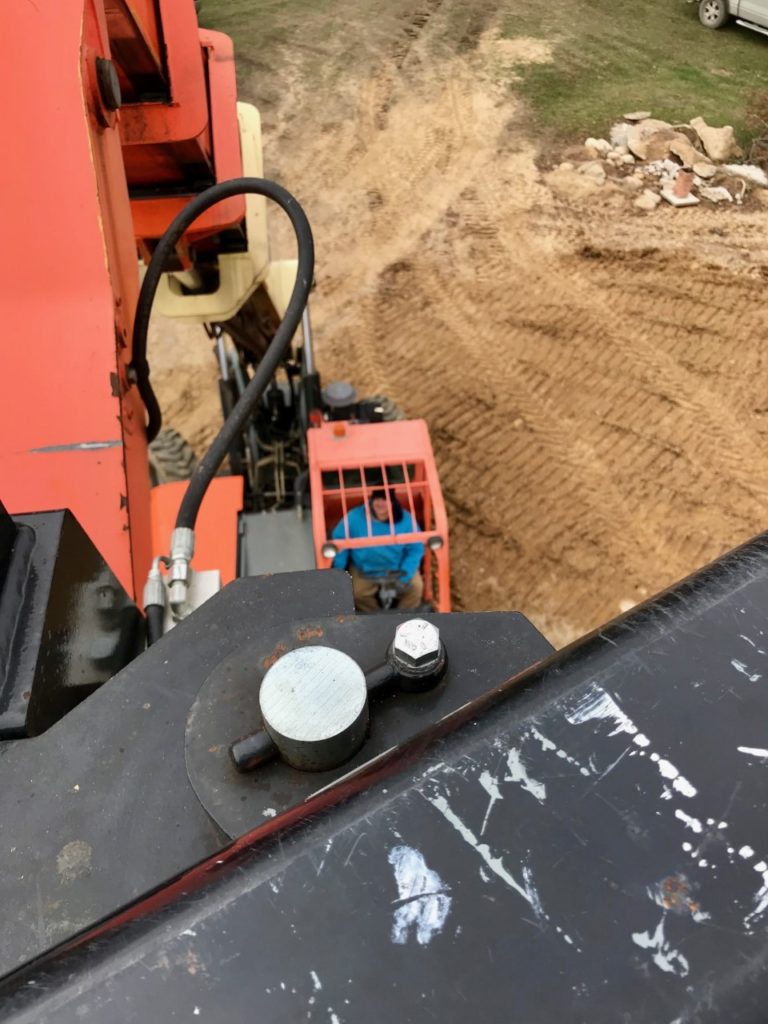 This one is a little better.  I got a little bit of the ground and not just the lift.  Oy.  Such a scaredy cat. 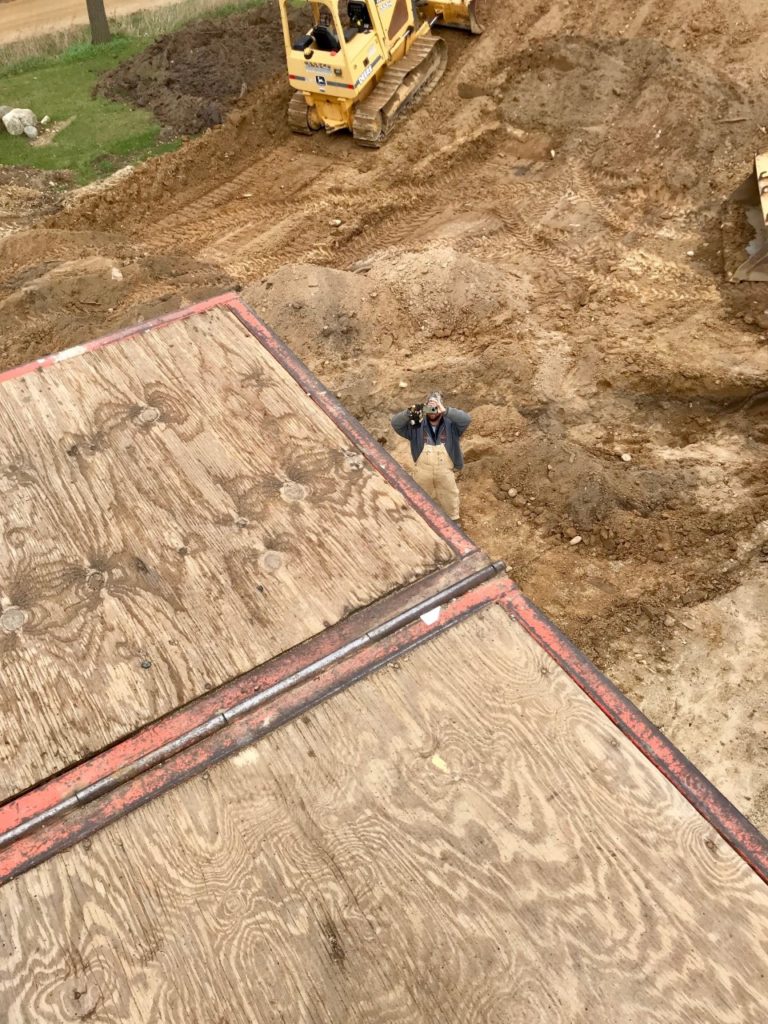 We have had so much equipment here at DRF.  I got a little lesson myself, from the experts at Harker Excavating.  Thank you, David! 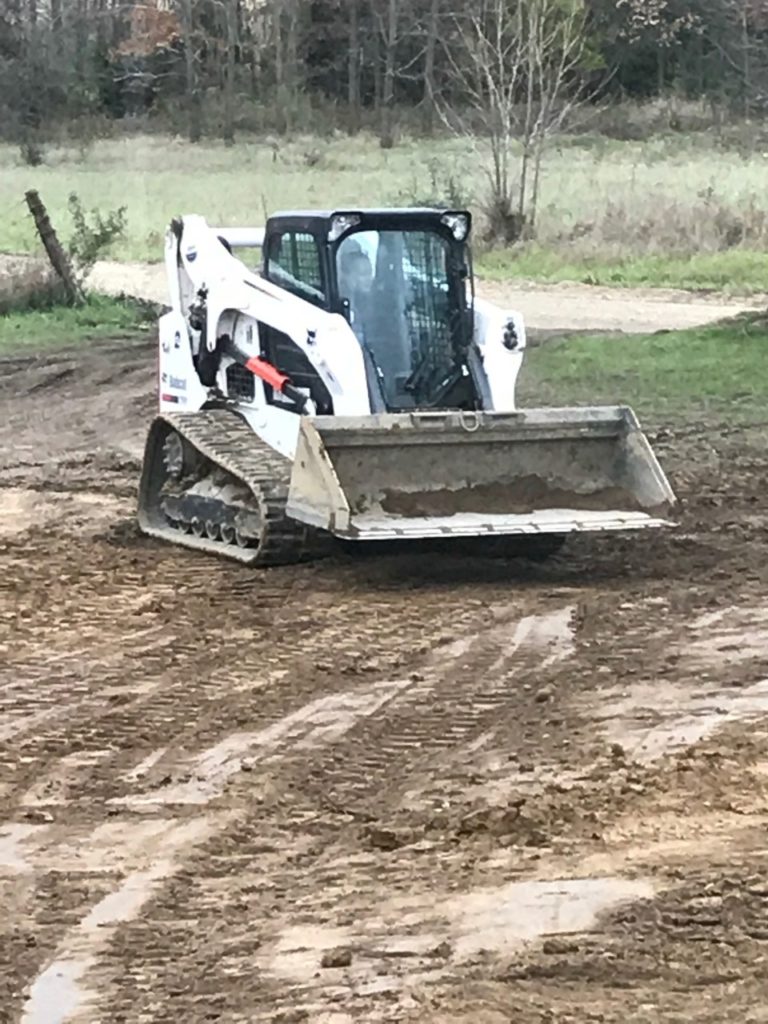 And while I didn’t actually do anything — other than squeal like a girl — it was fun. 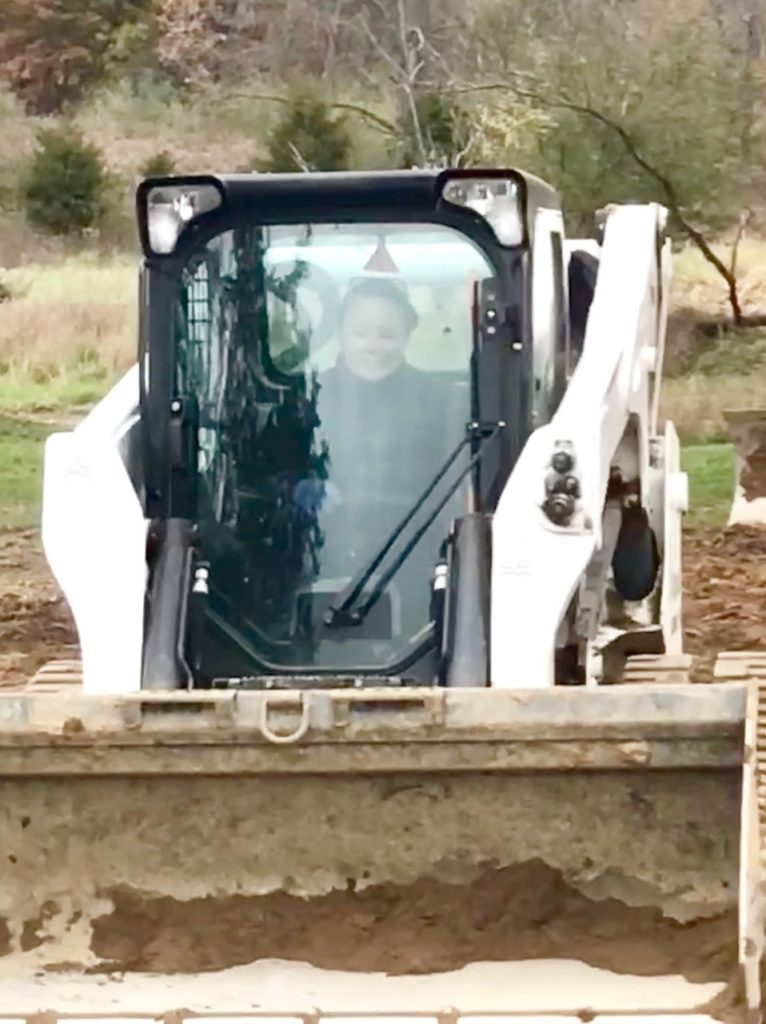 How Does It Feel

Yes, I still have to remind myself to just roll with things, to enjoy the journey, and keep a grateful heart.

So I hum the ditty “like a rolling stone” to myself, then laugh when this line pops into my head…

“Once upon a time you dressed so fine.” 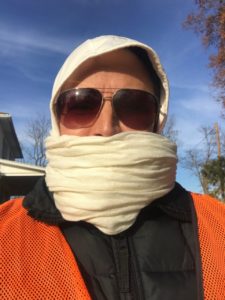