Demo is a long, laborious process, requiring patience and sweat. 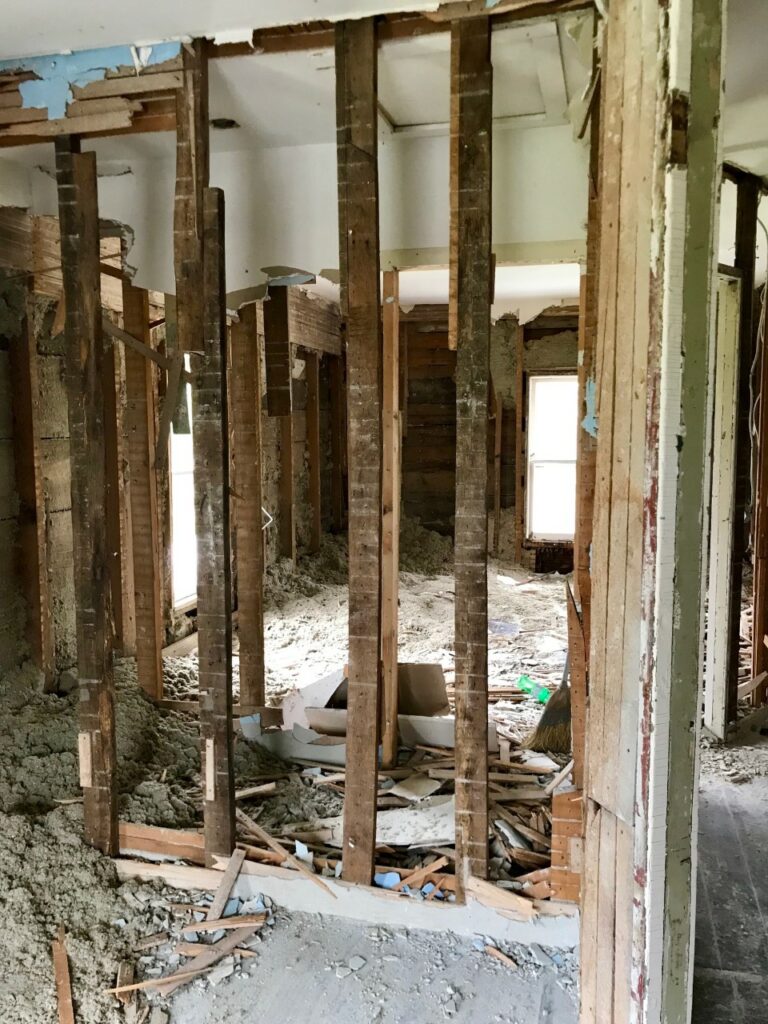 Eight dumpsters full, to be exact. We could have easily used nine, but by that point, the expense of dumpsters had capital-K-Killed our dumpster budget. (If you ever see BJR or I pulling a Shawshank maneuver — delivering pockets full of crushed concrete or plaster out through our pant legs, one leisurely stroll at a time — please just look away.  Nothing to see.)

Eight dumpsters full of plaster and lath and ton of hard work.

A testing of nerves and more patience (yes, I said patience twice…once for the process and once more for working side by side with your beloved).

It requires a little blood and tears too. (My tears and BJR’s blood.)

Oh, that image reminds me, it was also my job to puzzle piece items in the dumpster. (If you have ever paid for dumpsters, you understand what I’m talking about.  I will never haphazardly chuck anything away into a bin ever again. Cause, you know, that’s bought air space.) 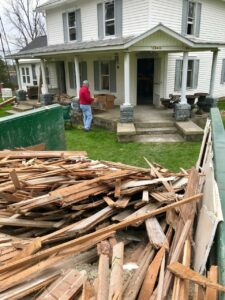 But we are beyond pleased — and exhausted — to finally say, that demo is just about, almost, really realllllyyyyy close to being in the DRF rear view mirror. 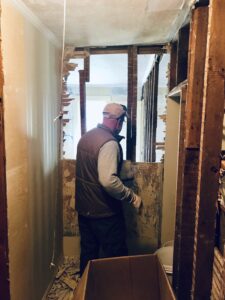 Board by board, wall by wall and room by room.

My main task was removing all the old trim, floorboards and ceiling tacks.

That entailed removing all the old nails and labeling anything that I thought should go back in the proximity of where it was removed.  (I’ll let you know how that goes.)

Every so often, I would discover some handwriting on the back of a board. 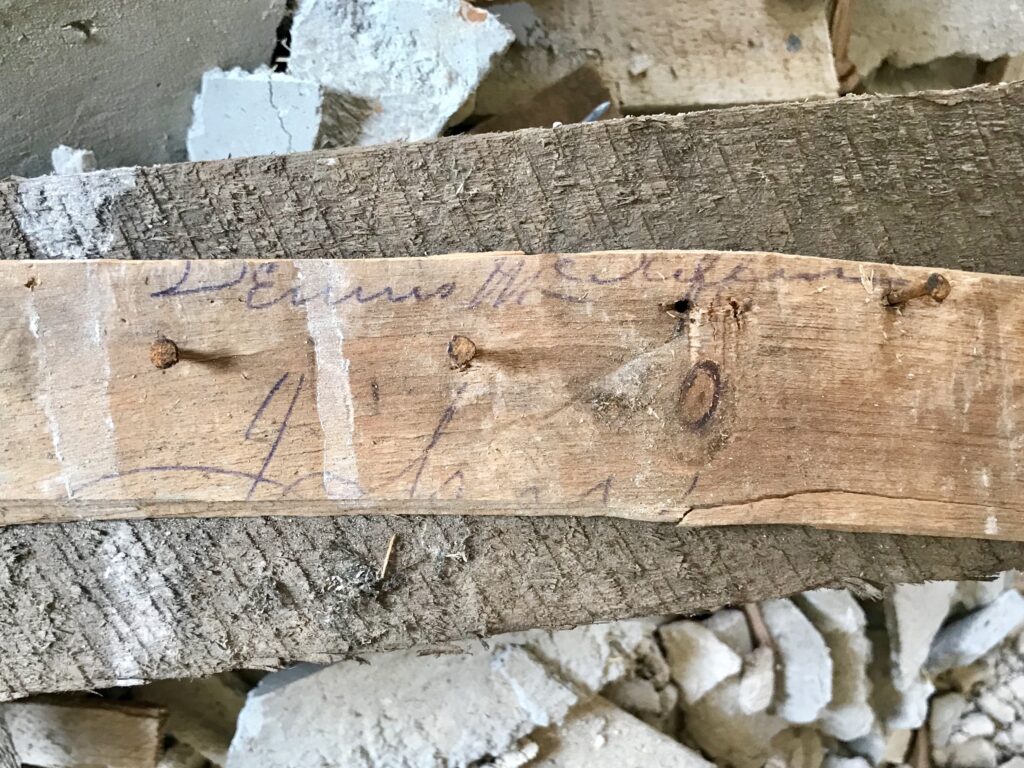 That was kind of a thrill to add my chicken scratch next to their script-y cheatsheet, ie., “S.E.” 1880s style versus “S.E.” boring style.

I will get to learn patience on an entirely new level when I start tackling the stripping of all the old trim, but that won’t happen until this fall. Which is technically soon.  Oh dear.

Here are the stacks and stacks of window and door trim, waiting to be made pretty again, before we repurpose them, before they get put back where they came from. 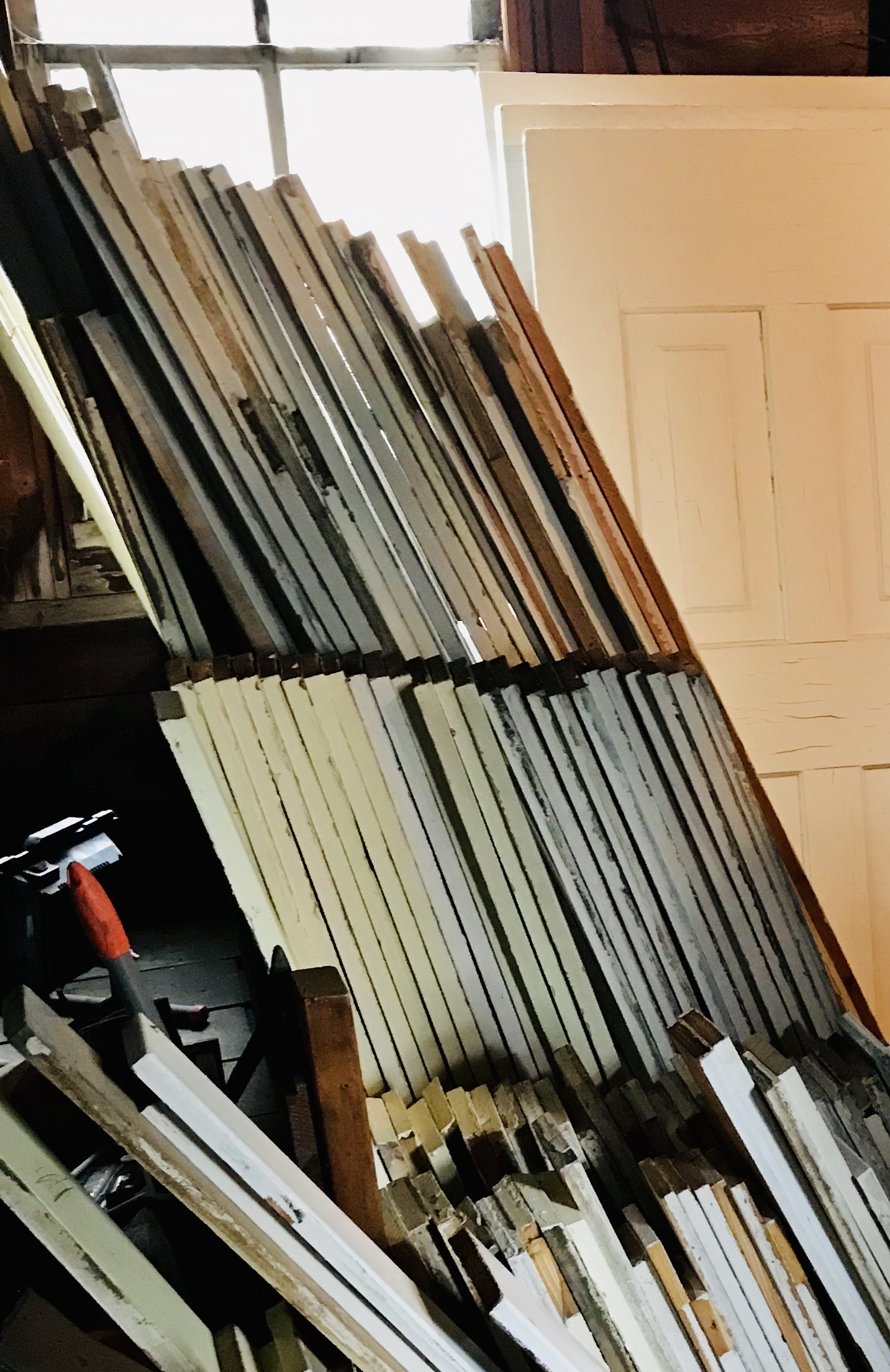 But thankfully, a journey is made smoother with the help of friends and family who hop aboard your crazy train and ride it with you. Thank you all, for your encouragement (and free labor) along the way.

Taking down 140 year old walls is not for everyone. Which I get — it’s so dirty. 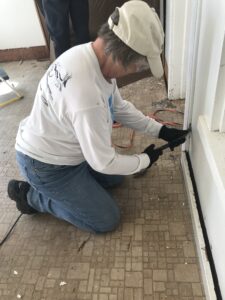 Thank you friends!  Your willingness to come and share your time and energy with us is appreciated more than your weight in gold.  Gold covered insulation even. 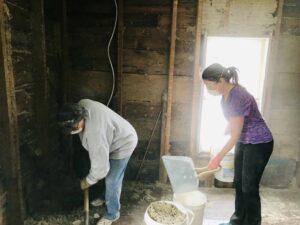 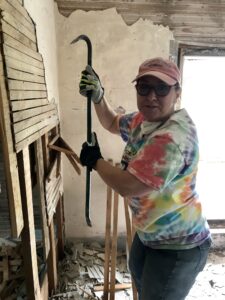 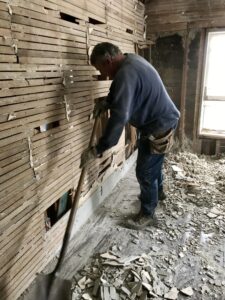 I doubt we would ever attempt the demo process again.

Or, as BJR very eloquently puts it, “We are never doing this again. Ever.”

We probably don’t want to know what it would have cost to hire a crew to do the demo, because after struggling to finish 4+ months of demo, it would sound like it was worth every penny to hire that shit out. (Sorry not sorry for saying “that sh*t” because demo is shit.)

But, a demo crew wouldn’t stop to investigate all the crusty, dusty finds. Like three layers of wallpaper under the stairwell.

Yes, under the stairwell.  Go figure. 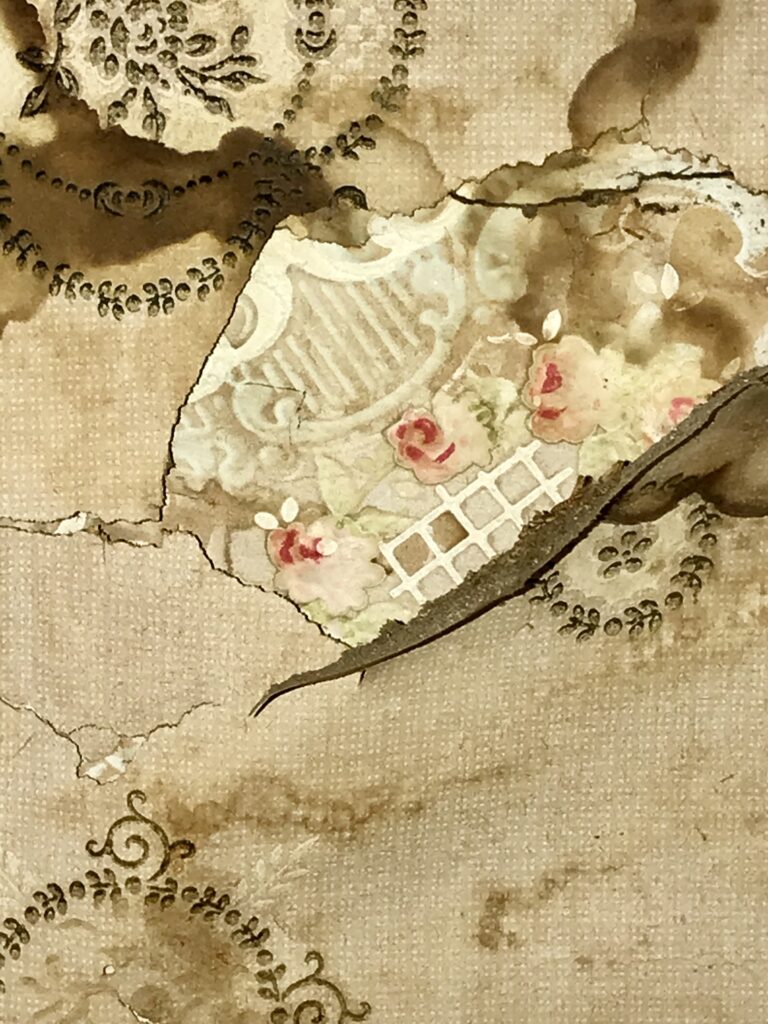 Or they wouldn’t appreciate the patching of empty knot holes with random scraps of metal. 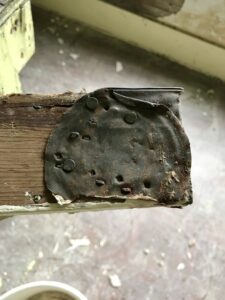 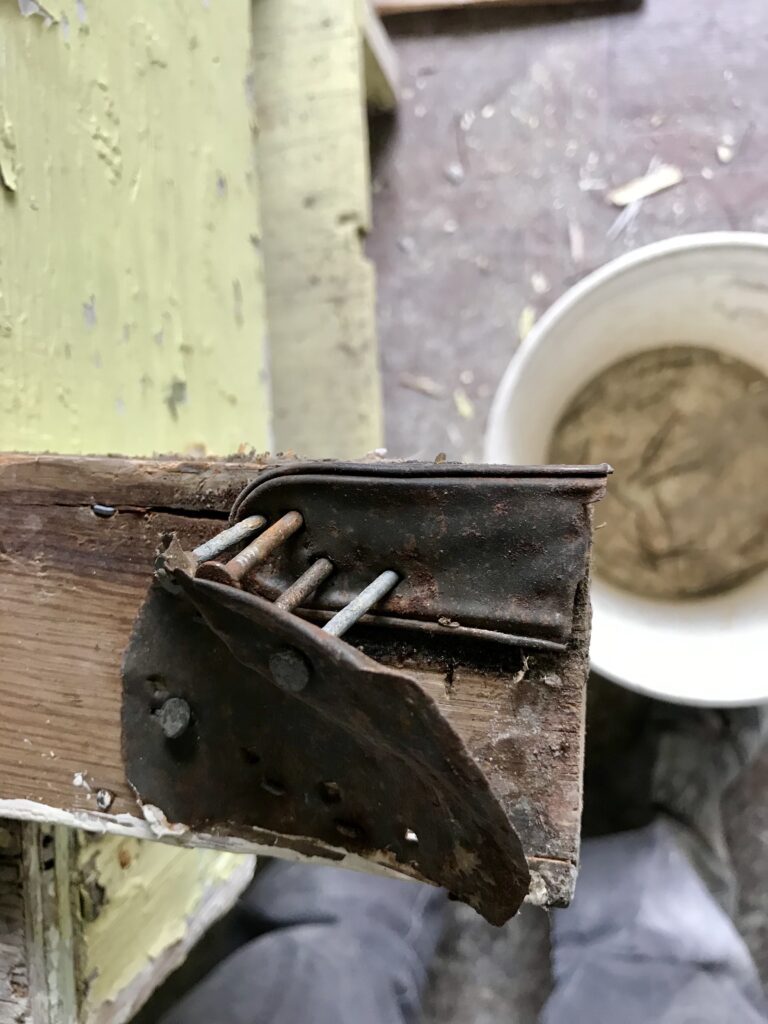 A demo crew would probably stop long enough to at least check the dates on the newspapers they uncovered in the walls. 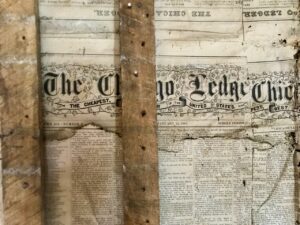 But, I doubt they would have taken the time to find an Exacto knife, and tweezers, to coax off the newspapers, trying to remove them in as big as chunks as possible. I know they certainly would not iron those scraps in an attempt to preserve them. (Don’t judge me. I haven’t actually tried ironing 140 year newspapers. Yet. But it’s on the to-do list.)

Or appreciate how prose has changed in those 140 years.

Or look close enough to see the beautiful typesetting work.

Or appreciate early advertising which had not been focus group tested or photo-shopped. 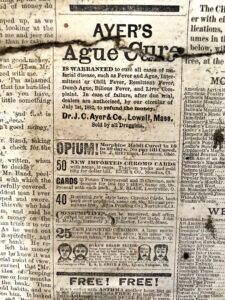 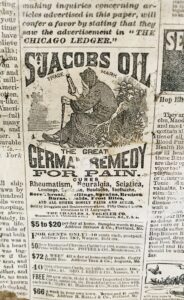 Maybe a demo crew would stop and laugh about the old, little lady’s shoe in the wall?

And maybe they would thumb through a critter-chewed publication, written by one of the neighboring schools — which included a baseball schedule from the 1902-03 season? But that book also smelled a lot like old pee, so probably not.

So they would have missed this sweet ad about where to tan your hide. (I imagine that’s Pa Ingalls modeling said tanned hide.)

They probably would have saved the old chalk line found nestled between the studs too — but they might have been so task-oriented that they would’ve missed it.

I do know this one thing for sure:
this little hypothetical demo crew would have never stopped to appreciate that someone, long ago, marked the height of a 5′ 6″ person on a bedroom door frame.

I, however, as a 5′ 6″ tall person found that to be absolutely serendipitous. 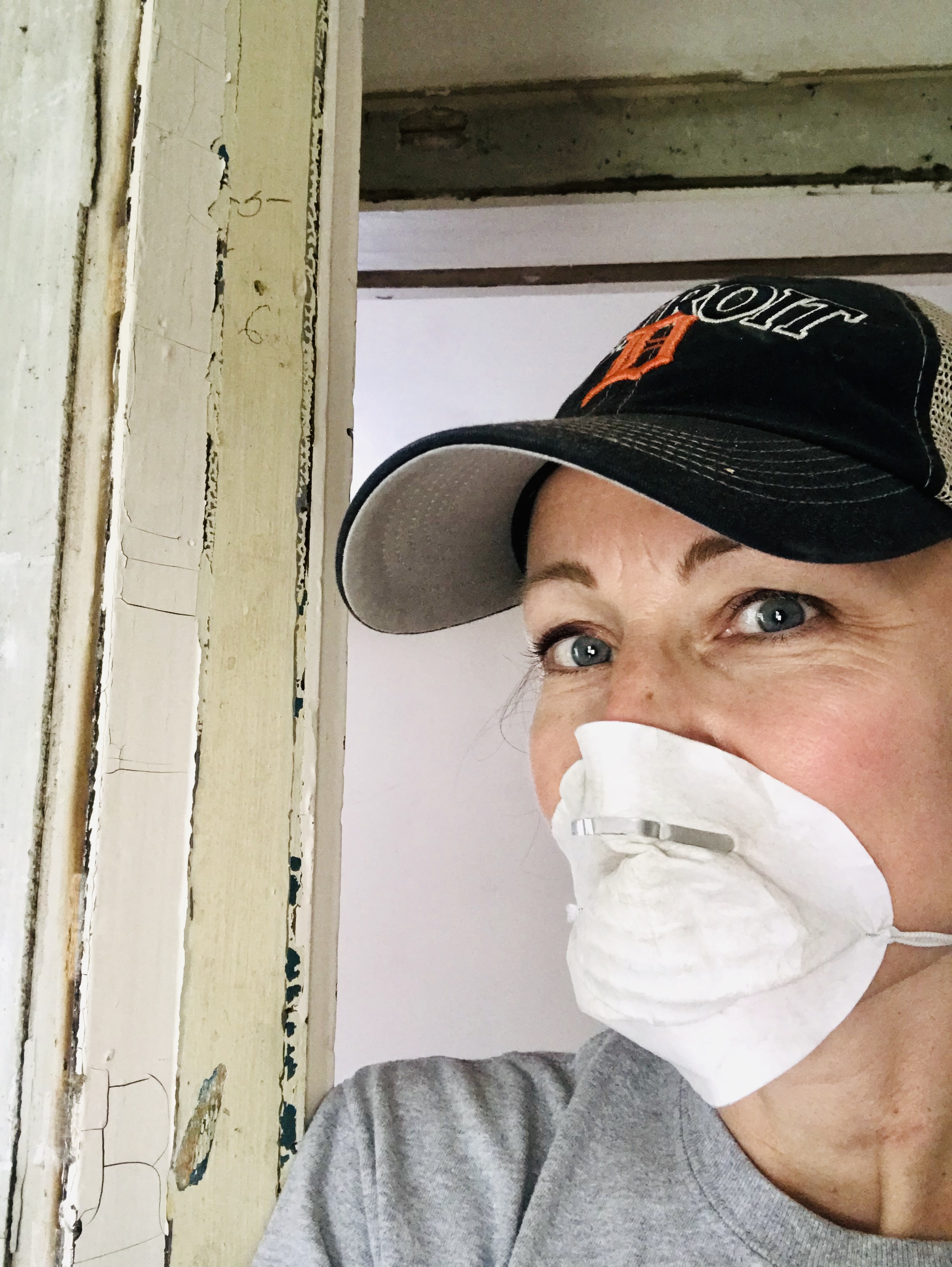 5′ 6″ of coincidence which doesn’t feel at all coincidental.

After all the disgusting, blackened farmer-blows, insulation stuck in your crevices, and clothes stripped off at the door because they were too nasty to go any further, it has all been worth it.

You just don’t know fun until you remove CEILING insulation so dense that it looks like pieces of foam, but then crumbles the moment you touch it. 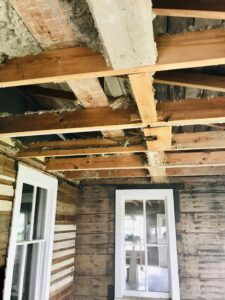 I tried poking it with the end of my pry bar and getting it to slide off, intact, into buckets. 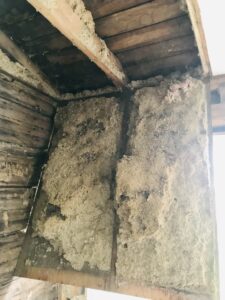 That didn’t work very well, like trying to jolt a sleeping bear into a bucket.  Not my most ingenuitive moment.

After mucking my way through that ceiling, I stopped asking BJR why he didn’t want to take down the upstairs ceiling. (Free demo tip of the day — avoid demo-ing ceilings in old houses whenever possible. You do not want to know how many little presents critters had deposited over the year.  Just insert the smell of ammonia burning off your nostril hairs.)

Old insulation sticks to every visible pore on your body.

It will not ever make you feel rich or luxurious.

But it will make for a grateful heart.

Grateful for the journey to be underway again, after a long spell of sitting on the sidelines, waiting to see what was going to happen with industrial turbines.

Grateful for family and friends — both old and new — who have pitched in to help get this old house back on her feet.  We could not have done it without you all. 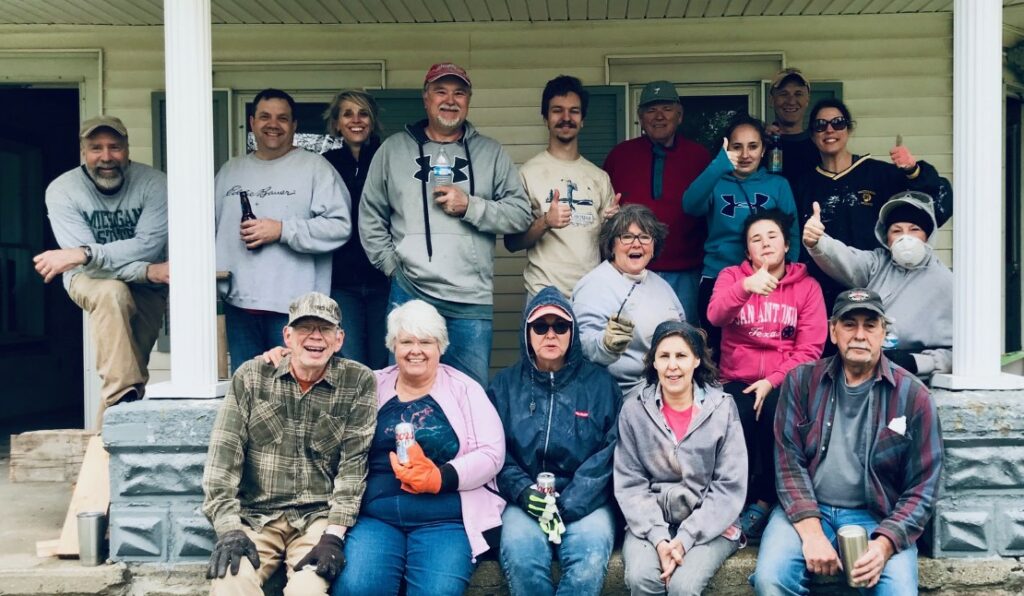 Grateful for my hard workin’ Brian John — who has supported me going out and fighting the good fight alongside my “Coalition family” to combat DTE’s attempt to invade our lives, these last longggg 20 months — while all of this has been happening.

It has not been easy.  But oh is it worth it. 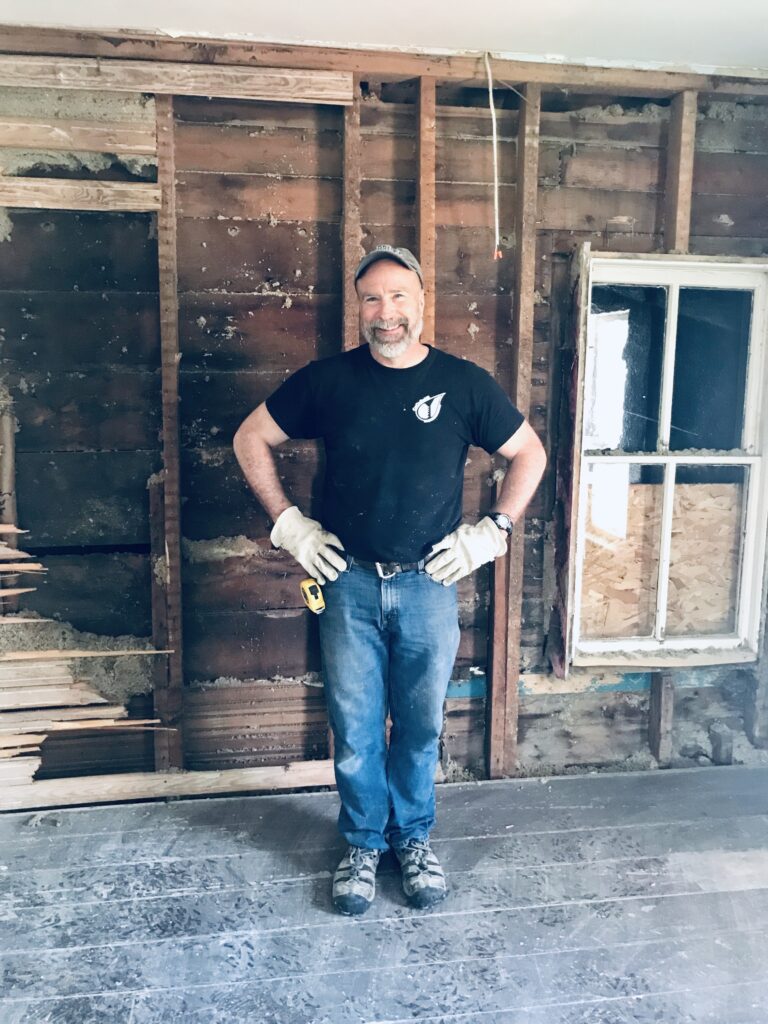 We are grateful for being able to find beauty in the smallest of things. 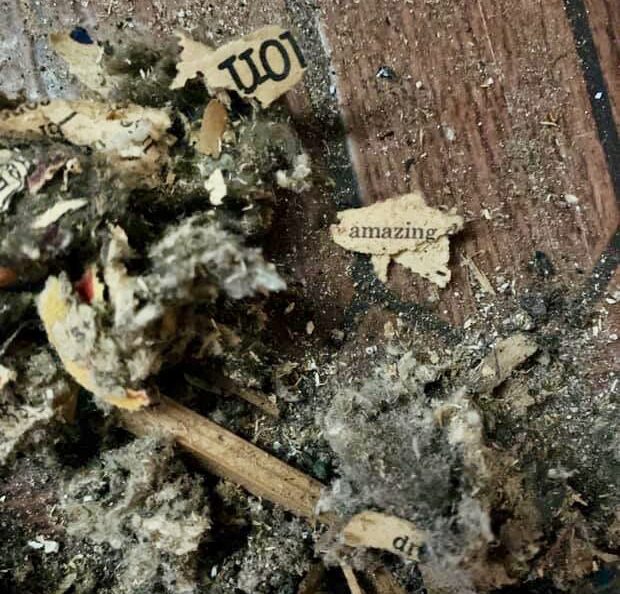 Even in small things like mice nests in the wall.

Kinda crazy how there is almost always something beautiful to be found even in the messiest of messes.

So from our mess to yours — love from our DRF!
xo
PJR