Last July, when I went to pick up Cooper’s graduation cake from my new friend “the cake lady,” I couldn’t help but notice the primitive cupboard sitting on her back porch.  It was in need of some love, but ooohhh, it caught my eye!  I asked the cake lady about it, and she said they had pulled it out of the house when she put in her commercial kitchen.  (And if any of my Michigan people need a delicious cake, see Cakes by Candice! Seriously, scrumpdelicious!) The cupboard had been original to her late 1800s house but really had no place to go after her renovation. 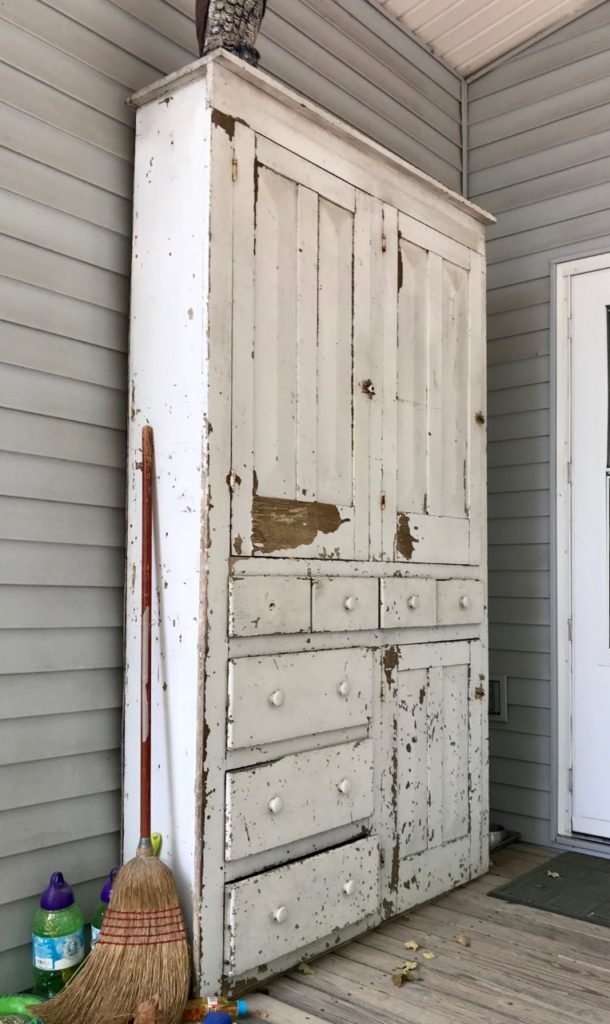 This beauty was a diamond in the rough.  She even had some original hardware. 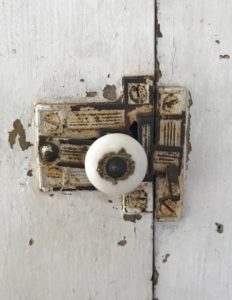 Oh, how I had wanted to find an old cupboard like it to put in the forever mudroom!

We could have had a piece custom made for the mudroom, but my “Plan A” is to re-purpose whenever possible.  The reality is that they don’t make things like they used to.  Pieces made from old-growth wood have more umphh, not to mention more character.

So, I spent the next couple months looking for a cupboard, but it was hard to find a top and bottom intact that wasn’t fancy-schmancy. Back in the day, most cabinetry was built on site.  If cupboards were salvaged from their original spot, many times there were no backs on them, and sometimes not even any sides…their frames fell apart upon pulling them out, and at best, maybe their doors were salvaged.  As a result, most of the salvaged cabinets and cupboards out there are the more formal pieces — higher end woodwork that would have been crafted in its entirety — and that was just the opposite of what I was envisioning for DRF.  Cause you know, DRF is not fancy-schmancy.

Time and time again, I thought about the cake lady’s cupboard.  So when Brian’s birthday rolled around in October, I took a chance.  When I ordered his cake, I started asking about that cupboard.  After some shrewd negotiating, we struck a deal.

I couldn’t wait to get my hands on it.  (And halleluja — when Candice and her family pulled the cupboard from their kitchen, they had the foresight to build a back for it — whoop whoop!)

As the piece is ginormous and heavy, it took four men to move it.  So it was way more than BJR and I could move by ourselves once we got it home.  It would have to sit in the trailer outside until we moved in to the new addition.

Finally after the move in, I had the time and energy to start on this beautiful old girl. 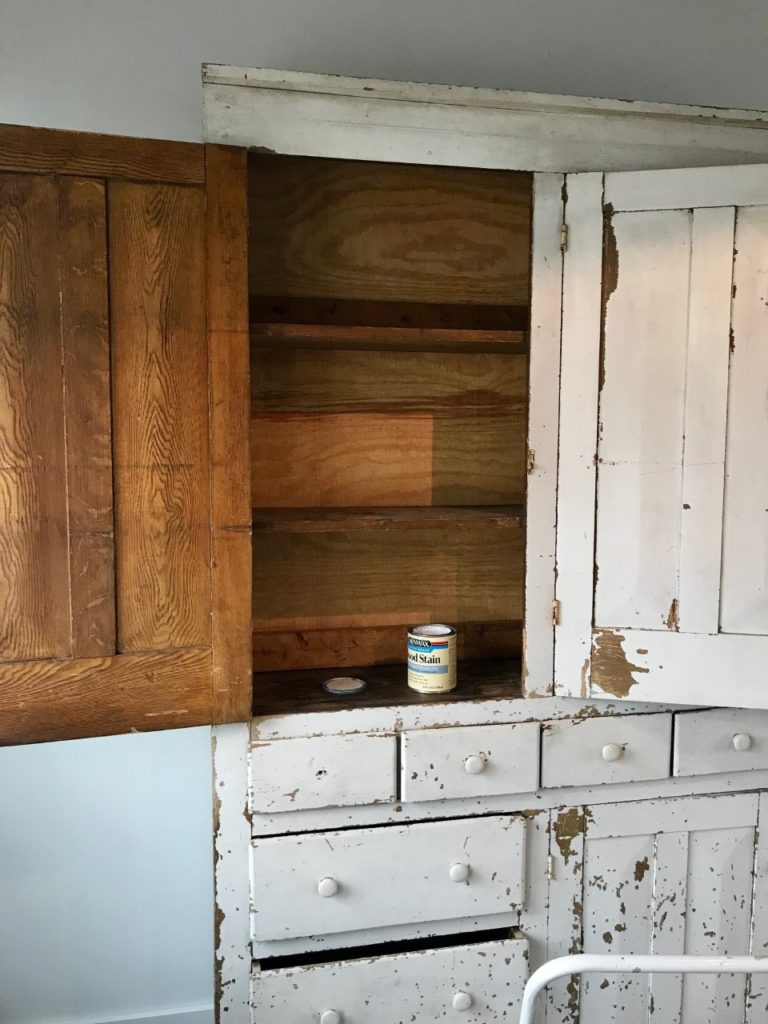 I didn’t want to strip the paint with chemicals.  I wanted to keep her much as I found her.  I covered her insides with a white wash, just to freshen it up a bit. And then I began to scrape. 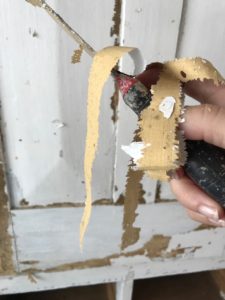 Fortunately, I think the cupboard only had the original stain and one coat of paint on it. 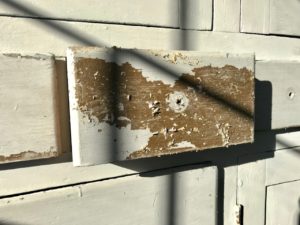 Another bonus of my luxury vinyl flooring (aka linoleum) — I would have never tackled a project like this on a new wood floor. Heck no. But the mudroom floor is completely forgiving and low-maintenance.  Two thumbs up.  Highly recommend it. 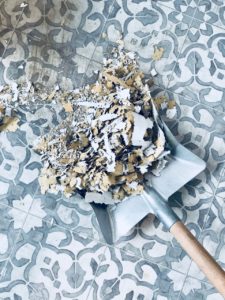 It was a lot of scraping before I could begin to paint. 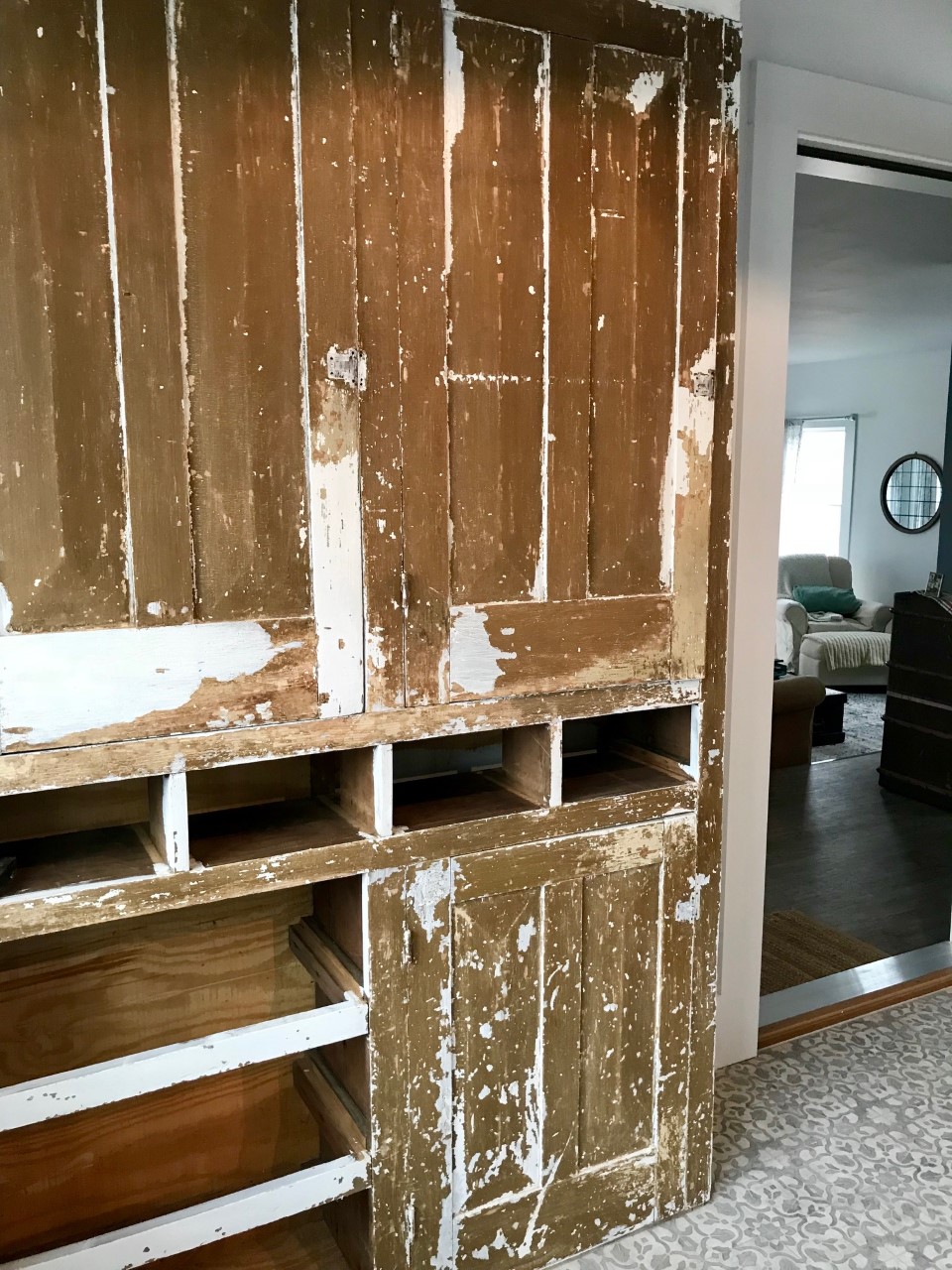 I also had to do some tweaking to the drawers so they were a little more user friendly and slid easier — love my Fein! It can tackle just about anything I ask of it. 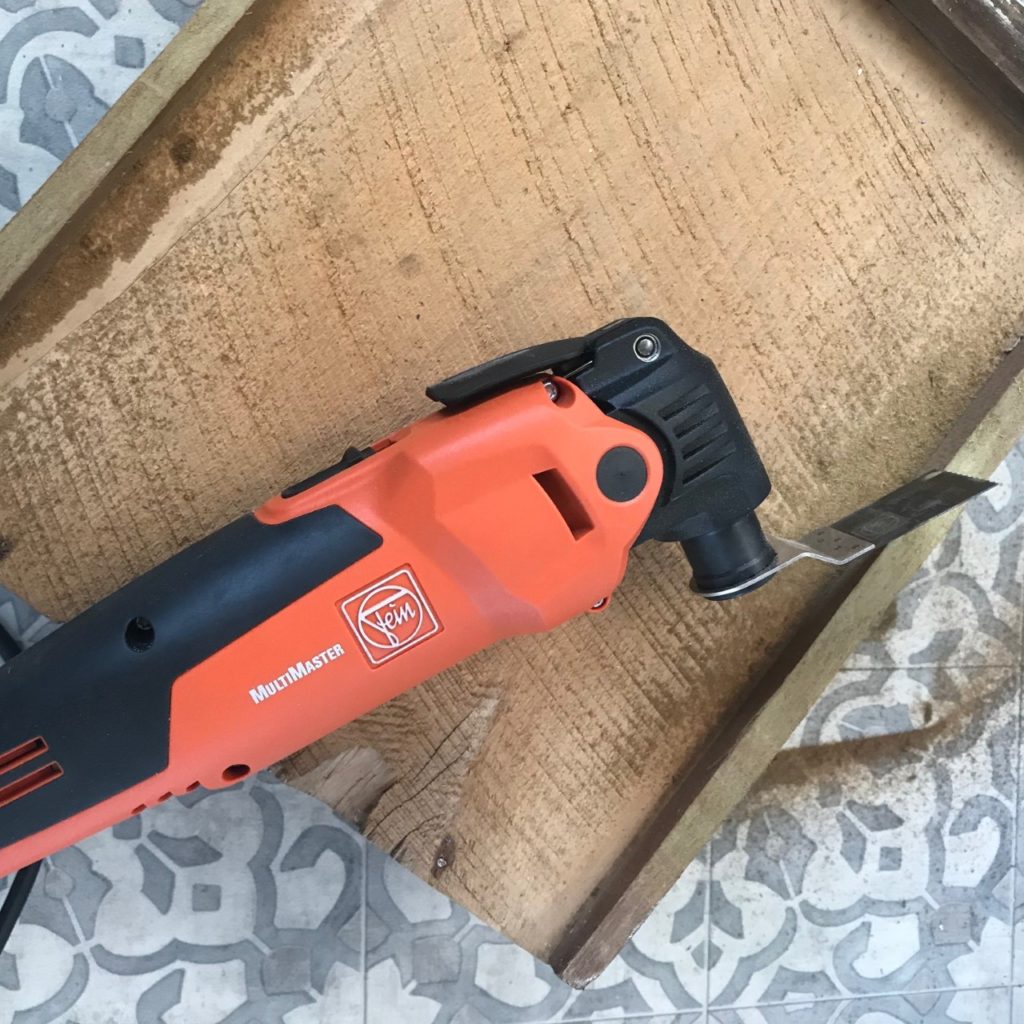 Finally, it was time to paint!  I used an Annie Sloan white chalk paint — and ended up doing two coats. Below, if you look close, you can see that one coat, on the left side of the cupboard, just wasn’t deep enough coverage. 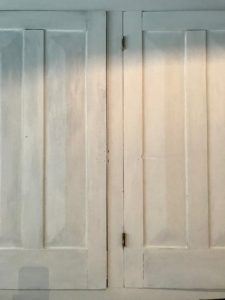 Then I applied a coat of white wax on top of that too, just for a little sheen.

I soaked the three original door latches in the crock pot for a couple of days to work off the paint — I saw that on TV and thought it was worth a try.  And in picking out new knobs for the cupboards drawers, I wanted to tie them into the old latches.

Here is the old latch, all cleaned up… 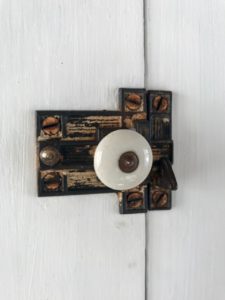 And here is the new hardware for the drawers. 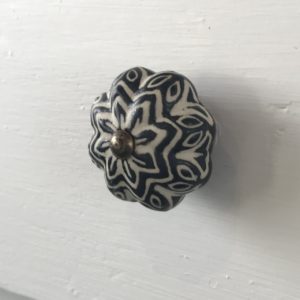 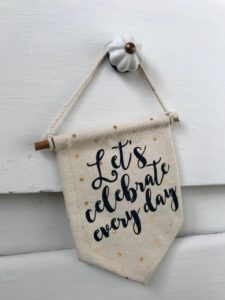 So now this pretty cupboard provides a great catch all of storage in the forever mudroom. 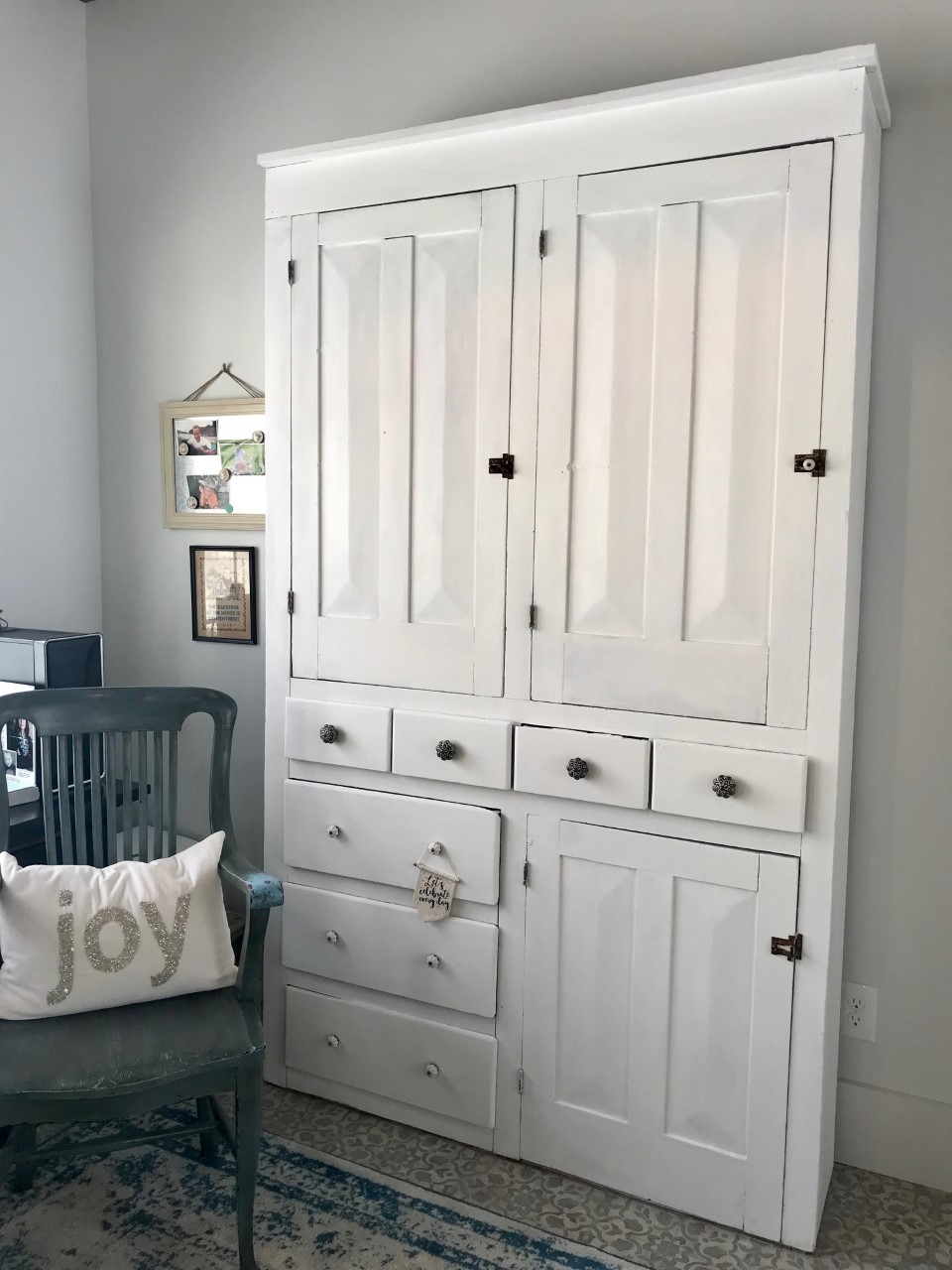 During the next two years of our renovation process, the mudroom has to multitask:  of course, it’s where we do laundry, but it’s also my office, library, and get-away.  I love how it turned out.  (Don’t judge my unpainted doors too harshly.  We ran out of exterior painting weather.)  Eventually, there will be sliding doors over the laundry nook too. If you look to the far left of this picture below, you can see where we have connected to the old original kitchen. 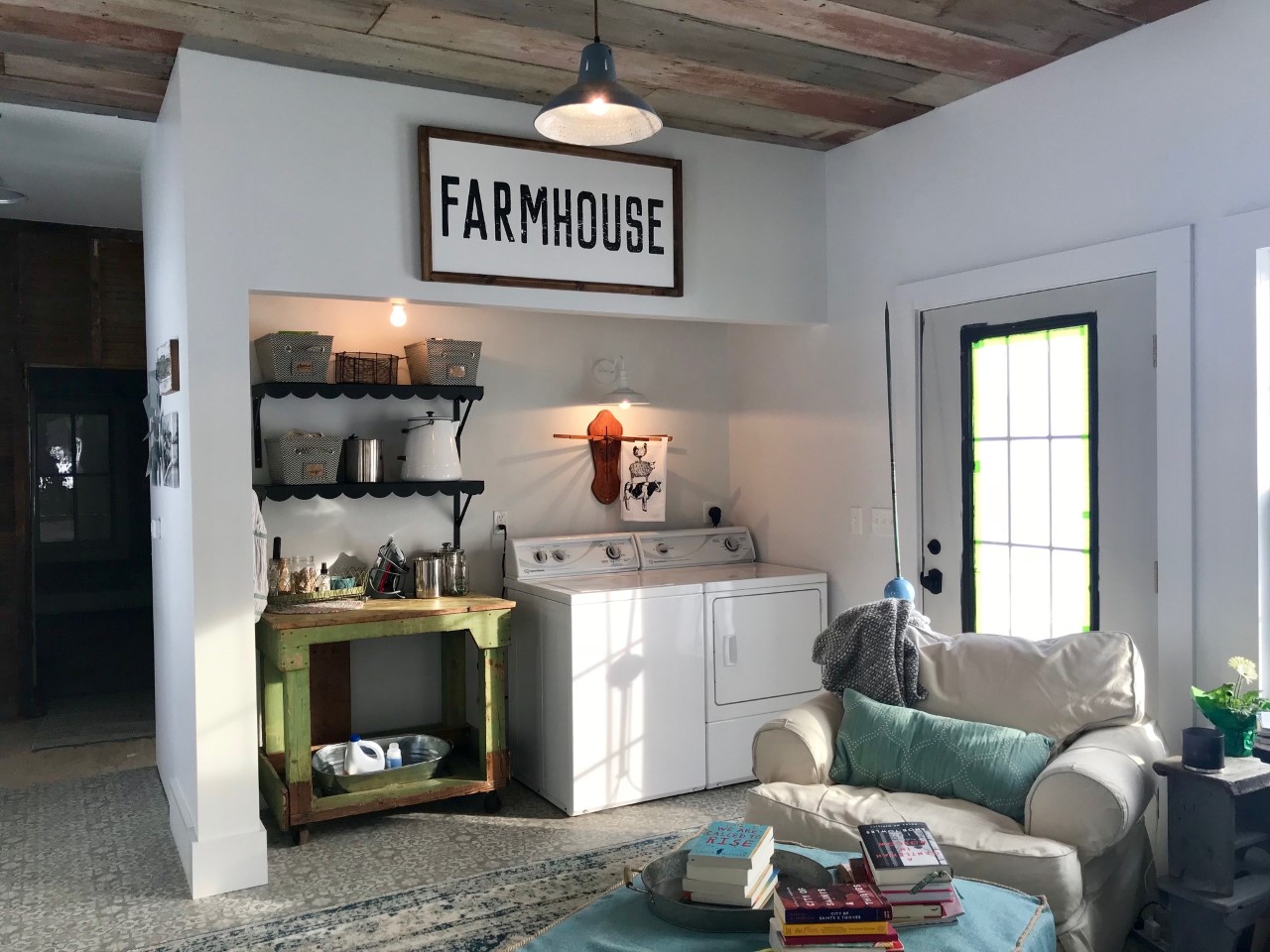 While I hated to cover up my luxury vinyl flooring, I did put a rug down for now, just to make it more homey. 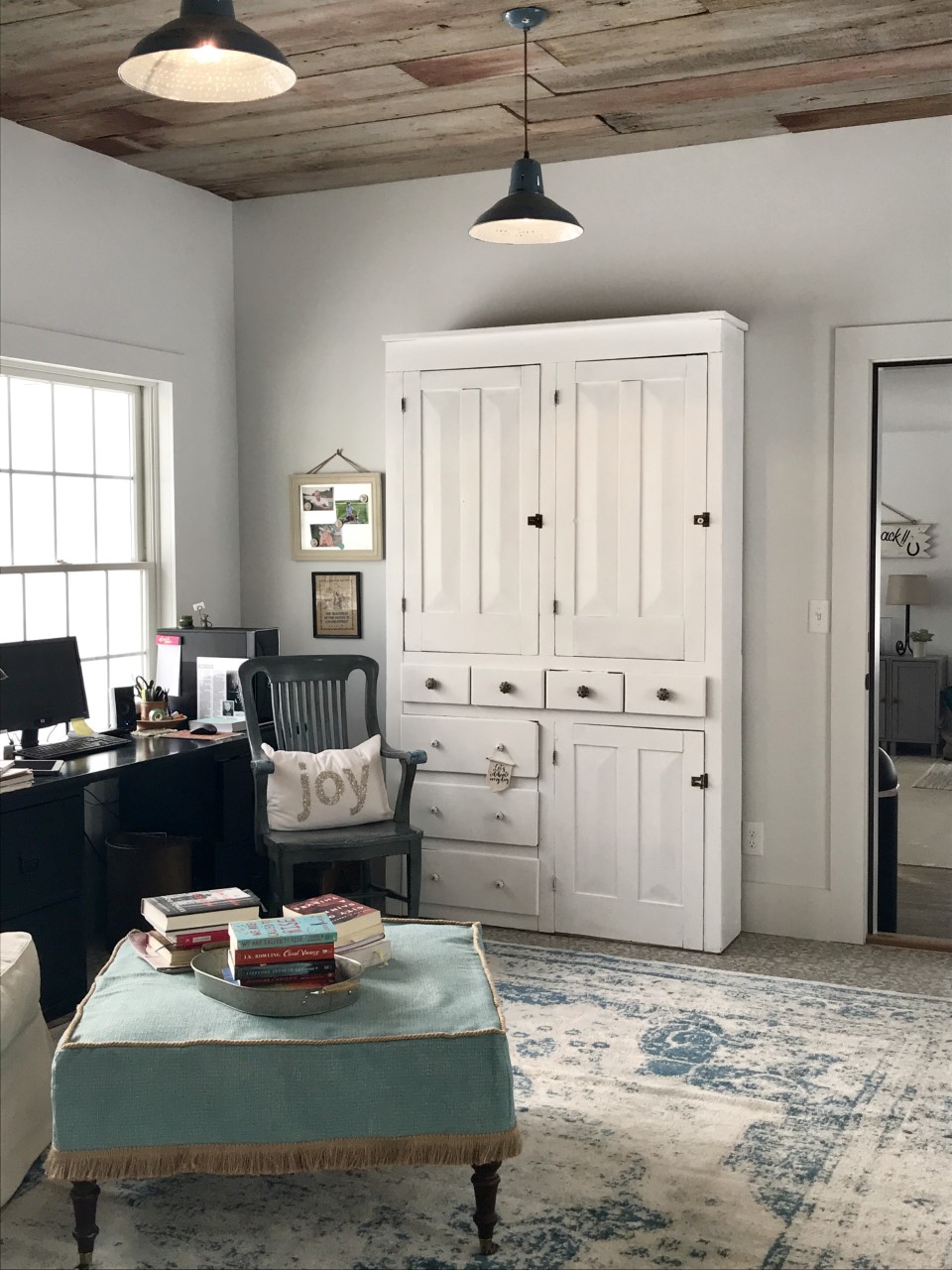 We are settling in quite nicely, during this little hibernation of ours.

More soon about this ol’ garage life, here at our dirt road farm…